The data for this list comes from a survey by CareerCast that ranked 200 jobs from best to worst based on five criteria: physical demands, work environment, income, stress, and hiring outlook. [2]

I can only imagine our medical naysayers choking on this list considering “general physician” ranks #45 and “surgeon” ranks #51.

Certainly they make more money on the average than DCs, which is to be expected as members of the “most terrifying trade association on earth” determined to maintain at all costs its monopoly and the high costs of medical care, but considering the stress they encounter, we DCs can take pride in our professional environment.

Every chiropractor should feel a sense of vindication considering how tough it has been to practice playing on an unlevel field with the odds stacked against us, but this ranking speaks volumes about how far our profession has come despite the medical stigma that continues to stain our public image, limiting our market share, and draining our energy.

I asked my staff and patients how they would rank “chiropractor” on this list of 200 jobs, none guessed it ranked so high. In fact, they weren’t even close when most of them reluctantly guessed chiropractors would be near the bottom. After years of medical defamation, their low expectation was understandable. And these are people who love chiro care!

Honestly, few people have little idea how delightful practicing chiropractic care actually can be with our “hands-on” care and wellness education. Relieving chronic pain in patients is a great reward and well appreciated by those who have suffered often for decades. Considering back pain is now the #1 disabling condition in the world, imagine how worse it would be without our brand of spine care.

Plus, we delight in helping millions and saving billions by avoiding the inevitable medical railroad destinations of narcotic painkillers and epidural steroid injections that lead to the inevitable spine surgery. A recent Washington State workers comp comparative study found patients who took the medical route for low back pain ended up having surgery 42.7% of the time compared to chiropractic patients who had surgery only 1.5%.[3] It’s nice to give them an alternative destination than spine surgery.

Another interesting business analysis by Forbes magazine gave an additional kudo to chiropractors. Forbes formed a list of the twenty most profitable types of businesses on a pretax basis. The data was drawn from financial statements on nearly 300,000 companies, most with under $10 million in annual revenue. The figures were gathered between January 1, 2003 and January 1, 2011, to capture an entire business cycle. To be considered, each category included at least 100 companies.

At #1 were Certified Public Accountants, with an average pretax margin of 16.5%. In second place were chiropractors with a margin of 15.3%. Physicians (except mental health specialists), had an average 10.4% margin that brought up the rear. [4]

Our high ranking in these two surveys says a lot about the business nature about our brand of healthcare. I daresay if it weren’t for the AMA’s “wither on the vine” policy to marginalize chiropractors, we would be ranked closer to the top of all healthcare providers.

Aside from the business factors used in this survey, one criterion specific to the healthcare industry should have focused on clinical effectiveness. Since the 1930s the AMA branded itself as “scientific medicine,” but recent evidence shows this is another hoax perpetrated upon the public and press by medical propaganda.

Indeed, in this era of evidence-based healthcare and best practices, new research should cause a lot of embarrassment among MDs considering 2,000 of the 3,000 medical treatments are considered by the British Medical Journal to be “ineffective, unproven, or too-risky-to-use.”

The Washington Post revealed to the American public this startling fact from the BMJ in a follow-up article: “Surprise! We don’t know if half our medical treatments work.” This can’t be reassuring to a country that spends trillions on medical care annually to realize much of medicine is guesswork. 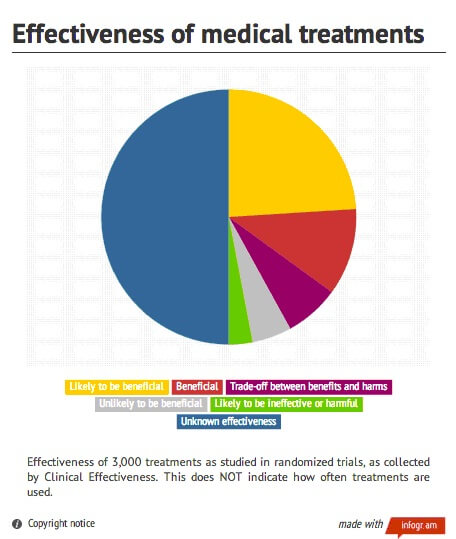 Morris Fishbein must be rolling over in his grave to realize his ruse of “scientific medicine” has been busted. To use this medical demagogue’s own epithet, 2/3rds of medical care is quackery!

The lack of evidence in mainstream medical care is not a new issue considering other medical critics have broached this issue publicly, including the father of evidence-based healthcare, David Eddy, MD.

In an article, “Medical Guesswork,”[5] published in Business Week, Eddy believes only 15% of medicine is based on evidence while more optimistic ethicists claim no more than 25% of medical care is based on actual science, suggesting as much as 75% of medical care is baseless. Certainly their high malpractice rates for the inevitable guesswork drives home the point that much of medicine is not only guesswork, it is dangerous and deadly.

Undoubtedly this “medical guesswork” about the failing American medical system based on “ineffective, unproven, or too-risky-to-use” treatments must be troubling to ethical MDs. This reality must create a strong case of cognitive dissonance among medical doctors whose satisfaction with the medical profession is waning despite their high compensation.

According to Medscape, a 2013 survey found there has been a steady decline in overall satisfaction with the field of medicine with a bare majority (51%) of physicians who would still choose medicine as a career. Only 42% of doctors would choose the same specialty again, down from 61% two years ago.[6]

I have to believe much of this anxiety results from a contradiction between the MDs’ inflated perception of themselves as wealthy members of “the most terrifying trade association on earth” and the harsh reality of being in a profession that is bankrupting our country with expensive and ineffective care mostly based on guesswork.

Perhaps this intellectual conflict explains why half of MDs would change careers no matter how lofty they appear to be. Sooner or later they will have to answer for their actions in the court of law, the court of public opinion, or a higher court.

Adding to this clinical angst is the entrenched medical bias based on snobbish, not scientific, beliefs fostered by Fishbein and expressed today by contemporary demagogues such as Dr. NM Hadler, author of Stabbed in the Back, who was candid about one thing in his book—his ingrained medical bias.

Let me get this straight: Hadler admits medicine has “lost its way” as evident by the largest healthcare folly on earth, but he still feels medical “practitioners hear a higher calling.”[8]

While this accusation may come as a shock, as many as 60% of doctors and scientists are atheists stems from the unnerving admission by Francis R. Collins, MD, presently the Director of the National Institutes of Health, the former head of the Human Genome Project, and undoubtedly the most powerful medical voice in the nation today.

I know I am treading on dangerous waters, but it must be terribly difficult for those MDs who believe in God to work in a medical environment dominated by atheists. Imagine the spiritual conflict of a believer who is chided by his own clan members for invoking the power of prayer with patients.

Little do medical students know that to be accepted by the elite within medicine they have to become atheists. Invariably they are taught, “You can’t be really smart if you believe in God.” Even in chiro education, there are those atheists who ridicule vitalism as quackery despite their lack of any alternative explanation for the energy that keeps us alive. Instead, do these atheists pray to their own DNA or what?

I also wonder what the reaction of patients who are believers would be to learn their own doctor may be an atheist. Here in the buckle of the Bible Belt, that may not play well on Main Street. It just doesn’t seem right that doctors who deal with life and death issues do not believe in the source of life itself.

I daresay atheists in healthcare are simply in the wrong science. They need to find another niche in non-vital sciences such as engineering where there is no God-factor to deal with and where there are no life and death issues.

Plus, they are ignoring the psychosomatic issues that play a big role in healing via powerful neurochemistry that is essential to the healing process. I understand their argument that “you can’t prove there is a God,” but taking the ‘bio” out of biology runs contrary to those who believe there is more to life than the sum of our parts.

Chiropractic faces both extremes—the atheists who ridicule vitalism and, on the other hand, the chirovangelists who chant “the only thing chiropractic can’t cure is rigor mortis.”

Indeed, the chiropractic profession has not been immune to its share of demagogues, and scalawags. We have seen unscrupulous practice managers stain our image with shyster “tricks of the trade” and phony vendor-driven alliances (WCA) led by yellow journalists who divide our profession and pollute the minds of many impressionable chiropractors.

Another ethical footprint not considered in these surveys is that chiropractors are not members of the medical monopoly that has caused more Americans to go bankrupt other than the loss of a job, nor are we the reason why Americans lead the industrialized world in every category of disease while being at the bottom in longevity, allthewhile costing more than the next ten countries combined.

Certainly, our tribulations are pale in comparison to medical machinations that affect MDs. For a profession dedicated to the Hippocratic Oath to “do no harm,” it appears modern medicine does more harm than good considering their unscientific nature with “ineffective, unproven, and too-risky-to-use” treatments that lead to high iatrogenic deaths, drug addictions, and millions of patients bankrupted by the high costs of medical care.

For chiropractors, it is reassuring to know we are not funneling patients to spine surgeons who still mislead patients with the “bad disc” diagnosis for LBP. Chiropractors are also not promoting useless, expensive, dangerous, and sometimes deadly epidural steroid injections.

Nor are we feeding patients into “pain management clinics” that prescribe opioid painkillers like Halloween candy that last year alone killed 38,000 Americans and caused untold cases of drug addiction, depression, and suicides.

We know this scenario happens because we’ve all seen it firsthand and, hopefully, we’ve helped many patients avoid this pitfall of medical spine care, the “poster child of inefficient spine care” according to Mark Schoene, editor of THE BACKLetter, an international spine research newsletter from Georgetown University and perhaps the most astute spine journalist in the world.

Unquestionably, this modern travesty in spine medicine must spoil their high self-esteem and their prideful collective image must be tarnished when Thomas Frieden, MD, director for CDC, admits that some physicians have supplanted street corner drug pushers as the most important suppliers of illicit narcotics.[9]

Sadly, the quintessential Marcus Welby, MD, has fallen from grace as a healer into the abyss of modern drug addiction caused by his own profession’s largess from medical payola fueled by Big Pharma. What a sad commentary to a once noble profession.

All I can say from the chiropractic perspective about this medical mess is Schadenfreude and it’s about time the truth comes out.

Early Predictors of Lumbar Spine Surgery after Occupational Back Injury: Results from a Prospective Study of Workers in Washington State,Spine (Phila Pa 1976). 2012 Dec 12.

[7] Hadler, NM, Stabbed in the Back; confronting back pain in an overtreated society, University of North Carolina Press, 2009. p.64