“They have given every single one of their tomorrows

so we can have our today.” 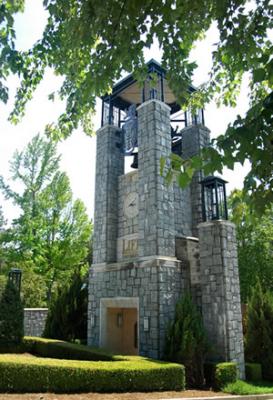 The tomb of the Unknown Soldier at Arlington National Cemetery is a solemn tribute to those faceless heroes who fought for the cause of freedom. Unlike that famous tomb in Washington, DC, there is a little known bell tower in Georgia dedicated to the thousands of unknown chiropractors who fought for freedom in healthcare in a virtually unknown war between medicine and chiropractic that has lasted over a hundred years.

At stake was not only the survival of the chiropractic profession, but the survival of an ageless healing art that has helped millions of people suffering with neuro-musculoskeletal problems, which happen to be the single largest cause of disability today.[1]

There is a related story that the American public has never been told—what it was like being a chiropractor during this war. Few people understand how tough it was since chiropractors, due to a contrived stigma, are rarely the subject of examination in the  media. Indeed, when was the last time you’ve seen an in-depth news program about the benefits chiropractors bring to a world riddled with opioid (heroin) painkillers and subjected to unnecessary and ineffective spine surgeries based on a debunked ‘bad disk’ diagnosis? Of course, you never have.

Not only did chiropractors have a special knack with their skilled hands to adjust their patients’ spines, but the foremost requirements to be a chiropractor were a strong backbone, a thick skin, and a resolute spirit.

For over a century an unwavering attitude has been woven into the chiropractic character that remains an untold story of grit and survival. Certainly this profession has never been for the weak of mind or body—just ask the thousands of chiropractors who have fought in this medical war. When the inevitable salvos began to fly, many who were less dedicated soon sought another line of work. Many chiropractors died of a broken spirit; many more were left gravely wounded financially or buried beneath the burden of bias.

From New York to Louisiana to California, chiropractors were routinely harassed, extorted, arrested, often ran out of town, and beaten up by the local police. During the first half of the twentieth century, over 12,000 American chiropractors were prosecuted over 15,000 times, and some 3,300 were sent to jail for practicing medicine without a license.[2]

This was clearly a bogus charge—by no means did they practice medicine since they never used drugs and surgery. Their only offense was helping sick people get well with their healing hands. Their real misdeed was competing with the medical profession for patients.

Fortunately, there were those dedicated chiropractors who carried the torch despite the overwhelming odds. Imagine yourself in the medical war as a chiropractor before state licensing laws were passed to protect you and your patients. There’s a knock at your office door and everyone inside freezes with fear. Like Anne Frank hiding from the Nazis or the runaway slaves on the Underground Railroad to the North during the Civil War, chiropractors and their patients felt the same terror before state laws legalized this type of care.

Your office resembles a speakeasy during Prohibition with a doorman looking through a peephole in the front door when patients knock to be let in.  The lookout makes sure they were not the undercover police who often posed as patients to make an arrest. Being busted was a routine event by the authorities to appease the local medical society and to earn a few extra bucks for themselves. Preying upon defenseless chiropractors was easy money.

Every so often the unofficial taxman from City Hall, dubbed the “Juice Man”, comes unannounced to squeeze you for protection money. The local police look the other way as long as you can pay the extortion money. When he finally comes knocking at your office door, he brings a couple of his thugs as enforcers to encourage you to pay.

Sometimes you can pay, but when you can’t, the Juice Man is troubled. If he throws you in jail, you won’t be able to pay him in the future. So he has his thugs rough you up with a good beating, leaving you with a few sore ribs, a swollen face, perhaps a black eye, maybe a few days in the hospital, and plenty of public humiliation—a clear warning to pay next time or else worse will happen.

Chiropractors were not the only victims of this medical war. This warfare has also taken a toll on millions of innocent patients who were collateral damage of the medical fire.

Many finally caved in to their back pain or succumbed to the verbal maltreatment, and acquiesced to a surgery that would forever change their lives. Not only were patients verbally abused, many were physically abused as victims of millions of ineffective back surgeries, and many were financially exploited who paid thousands of dollars for these unnecessary surgeries.

Yet still they came, literally limping into chiropractic offices with frowns of hopelessness, seeking the proverbial “last resort” because traditional medicine had failed them.  Many already had had back surgeries that failed to help despite the promises of their spine surgeons. Most were living in constant pain and disabled, some addicted to drugs. Most of all, they all had lost hope.

Adding to their despair, many felt torn like traitors who reluctantly changed sides in the medical war when their medical treatments failed them. But, after they got relief with chiropractic care, their entire disposition changed from fear and skepticism to relief, support, and then to anger.

They would ask questions that every chiropractor has heard many times: how can this be quackery when it helped me get well? Why didn’t my medical doctor refer me to you before he wanted me to have back surgery? Why did he let me suffer so long without telling me chiropractic might help me? These are all good questions that this book, The Medical War Against Chiropractors, will answer.

Indeed, the truth eventually has a way of overcoming propaganda, as it has for millions of patients over the past century who have discovered chiropractic care, including those who waited in fear of the Juice Man.

Just like the chiropractors of yesteryear who lived in fear, maybe that anxious person today is you, someone who lives in pain needing chiropractic care. Like millions of other Americans, you may be living in apprehension of your own Juice Man who takes on many different forms—the skeptical neighbor who condemns chiropractors although she’s never been to one, the biased MD who ridicules you just for asking about chiropractic care, the co-worker who had a back surgery but won’t admit it failed despite the constant pain, the insurance company that excludes or severely restricts chiropractic care, or anyone who discourages you from seeking a chiropractor’s help.

It is past time for the medical war to end and allow the wounded bystanders to seek chiropractic care. It is time to recognize these unknown forces at work that impede the use of chiropractors’ good hands to help millions of suffering people. Like the chiropractor hiding behind the locked door, perhaps you are also hiding from possible ridicule from the Juice Man. It is time to end this fear.

DD Palmer, the founder of chiropractic, also felt the wrath of the original Juice Man. Over one hundred years ago, he was prosecuted and jailed, as were thousands of his protégés who gave up many tomorrows to keep alive the benefits of this healing art today. Let their sacrifice be your to a better life.

Learn why generations of the brave men and women inexplicably continue t0 dedicate their lives to carry the tarnished banner of chiropractic care against overwhelming odds in this medical war. Hear their untold story from legal persecution and professional defamation leading to satisfied patients and scientific vindication.

This exposé is similar to other illuminating portrayals of social injustice, such as Betty Freidan’s The Feminine Mystique or Uncle Tom’s Cabin by Harriet Beecher Stowe. It is past time for America to learn of the century of conflict chiropractors have endured to bring people an ageless healing art that has now been shown to be more effective than medical care for most back pain problems.

This exposé fills the void in this dark chapter of medicine that has gone virtually unspoken for decades now. Professors of medical history and their medical and chiropractic students will find this textbook essential to understand the past warfare and present tension between the professions—the proverbial 800-pound gorilla that few have exposed for what is is—an assault on the chiropractic profession.  Only a chiropractor/author could write about the unknown plight of chiropractic from persecution to vindication. Only a chiropractor would divulge much of what is publicly known is a direct result of medical propaganda.

Plus, every wounded physician and chiropractor who have fought in this medical war will appreciate this perspective in order to understand the historical events, the prominent issues, the leading players, and the overall history that have shaped the prevailing tension between the medical and chiropractic professions that affects nearly every patient as well, certainly the 90 percent who will be struck with an acute low back attack sometime in their lives.

This book will also have cross-over appeal to those lay people and the media who want to know more about the biggest rift among healthcare professionals from the chiropractic perspective. This book will have great appeal to many Americans who can feel the existing cold war between MDs and DCs, but have no idea how this war developed.

Indeed, this book will answer the how and why this medical war against chiropractors began and has prevailed for over a century. Most assuredly, it will explain why someone polled about chiropractors once answered, “I wouldn’t want my daughter to marry one.”[3]

This compelling story will changed your attitude about chiropractic, astonish your better senses to learn of the crimes committed by the American Medical Association, and will give you a new perspective of the sacrifices of these men and women whose only crime was getting sick people well with only their hands.

[3] “Attitudes Toward Chiropractic Health Care in Oklahoma,” Welling & Company and Oklahoma Chiropractic Research Foundation in cooperation with the Chiropractic Association of Oklahoma (1984)