“Though it’s mostly one-sided and sometimes plays like a commercial for the alternative medical community, “Doctored” makes a cogent case for real cooperation between Western medicine and less traditional protocols…”Doctored” is an involving, well-crafted, humane look at a topic that stands to affect us all.”

One Small Step, but a Giant Leap

In the spirit of our first Apollo 11 astronaut Neil Armstrong who landed on the moon, let me say this documentary film, Doctored, is one small step in the illustrious film-making careers of producer Jeff Hays and director Bobby Sheehan, but it is also a giant leap for the chiropractic profession.

The impact of this documentary film will not be known until it has run the gamut of the public theaters, DVD distribution, and possibly the cable channels that show historical or educational programs. But for now, it is the best film ever done about the plight of both chiropractors and patients in the American healthcare system.

The excitement at the NYC Premiere was palpable. Although not as dramatic as the Oscars or Emmy award presentations with red carpets, bright spot lights, TV crews, or celebrities in designer outfits, there was an excitement in the air among the many chiropractic notables who had cameo roles in this documentary. It was fun to finally put a face to the many voices I have read in print over the years. 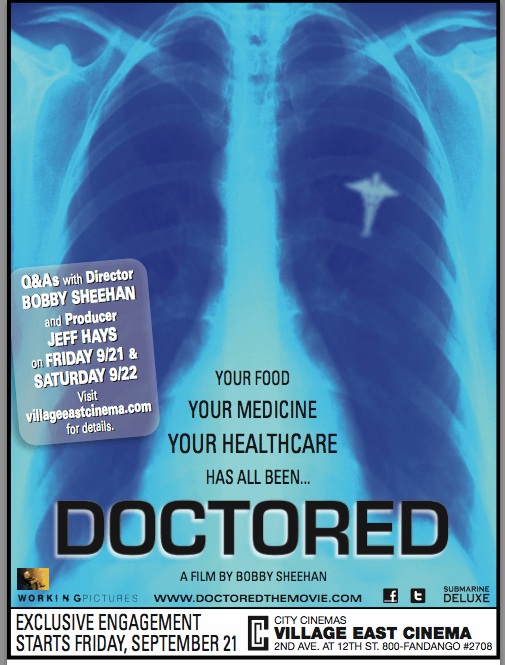 This film shows that we have many articulate spokesmen and women in our profession who tell this tale with passion and justifiable rancor as only a profession can do that saw 12,000 of its colleagues arrested in the first half of the 20th century for doing what we do daily—get people well with only our hands.

Indeed, this film vindicated the years of torment we have endured to bring our healing art to the public. Like the movie, Red Tails, about the Tuskegee airmen who overcame racist opposition to become the first Africa-American pilots in the US military during WW II, this video will tell part of our heart-wrenching saga for the first time—the untold story from persecution to vindication.

When my wife and I entered the Village East City Cinema in a trendy section of NYC where rich hippies still live, we found Bobby Sheehan, the writer/director, standing alone near the popcorn stand. He immediately approached me and asked, “Dr. Smith, do you remember me?”

“Sure I do, you’re Bobby Sheehan, the director. I’m surprised you remember me.”

“How could I forget you? You don’t know how many hours I’ve spent with you in the editing room. I love you!”

Somewhat shocked by his remark, all I could think was it must be the typical NYC chic filmmaker-speak. Nonetheless, it was appreciated to think my book had an impact in this epic movie.

I suspect most of what he filmed of me ended up on the editor’s floor, but after filming 160 interviews with assorted people, I can appreciate his massive job as director putting together this lengthy film like a jigsaw puzzle.

We then met Jeff Hays, the producer, standing next to the door entrance to the auditorium where his film was debuting. He was all smiles, pleased with the turnout and excited about the film itself. Like a newborn after gestation, it must be a huge relief to finally see his work come to life.

Jeff earlier had described his production:

With “Doctored,” we’re attempting set a new standard in this genre, to raise the bar and raise the level of discussion. We’re excited to see who follows us, who else will add to the conversation, with humor, talent, story, and heart.

As we filmed, we talked about the metaphor of “a small door into a large room.” It’s a big story, but it’s only meaningful on a person by person, story by story basis. It’s only when we follow our subjects: athletes, mothers, discouraged MD’s, marginalized Chiropractors, profoundly successful healers, and even patients that have been sent home to die, that we see the real story emerge.

They are the small door into the large room.

Indeed, this movie will open doors in the minds of everyone who sees it. Myopic medical demagogues will be mad, laymen will be scared to learn how “broken” the medical system actually is today, and chiropractors will feel some sense of redemption.

It will also explain to laymen why they “believe” what they do about chiropractic and healthcare in general. It will also open up doors to subjects they probably have never known, such as how our medical system actually is controlled by the pharmaceutical industry. 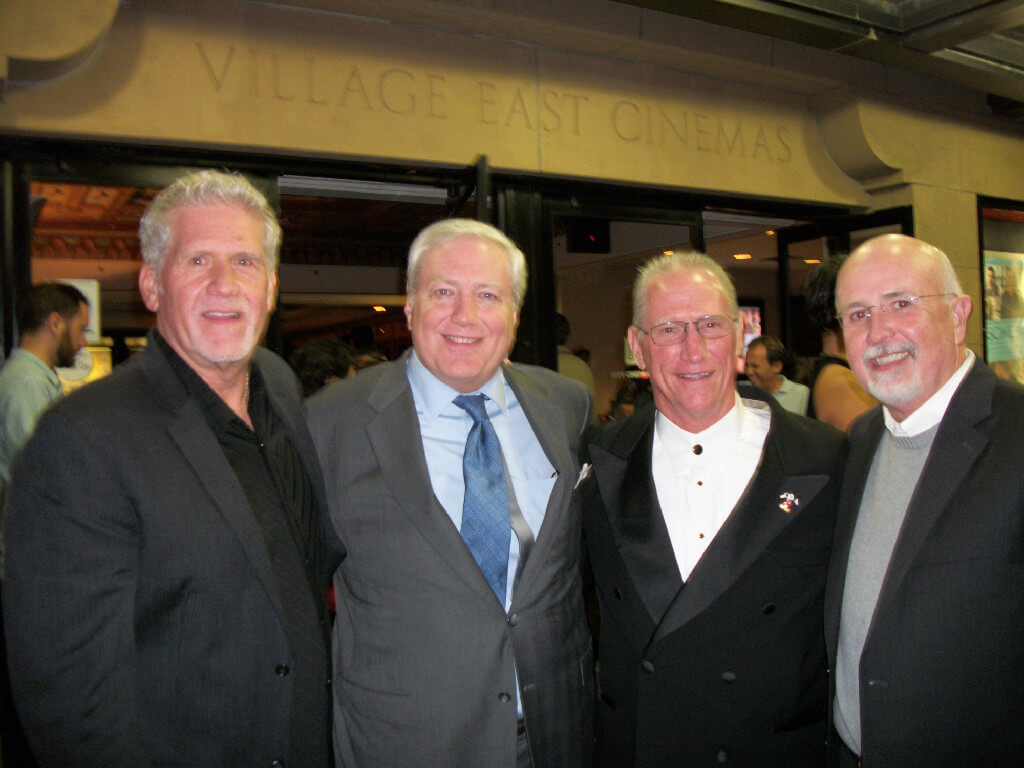 I was pleasantly surprised at the content of the many interviews throughout the film, not only from DCs, but from progressive MDs and frustrated patients who were understandably angry about their own medical experiences. People have little idea how broken our medical healthcare system is until they become its victims.

What struck me most after viewing the film was its enormity. The filmmakers bit off a lot when they chose to not only broach the medical war against chiropractors, which comprises the initial one-third of the movie, but they also delved into autism/vaccines, Lyme disease, pain pill addiction,
Guy Riekeman, David O’Bryon, JCS, & J. Michael Flynn
chemotherapy/alternative cancer therapy, genetically-modified food, to name a few controversial topics the film dealt with at length.

Indeed, this film has a whirlwind of issues that may blow away many laymen; it will be jaw-dropping and leave them with eyes wide open to the problems inherent in our broken healthcare system. It’s even worse than I thought.

This documentary will also be a very strong shot across the bow of the medical cartel’s battleships—Big Pharma, AMA Political Medicine, Big Hospitals, and Big HMOs. For the first time, chiropractic was able to contribute to the national narrative about America’s healthcare dilemma. It will be interesting to see what push-back, if any, we get from our medical foes who remain in denial and in monopolistic control of the expensive system that they like just the way it is, thank you, with them in complete control and profiting dearly.

Of course, in NYC, no film gets a free ride past the critics. The NY Times film critic, Daniel M. Gold, had in his review both good points and honest insight:

“Doctored,” Bobby Sheehan’s scattered film about the benefits of chiropractic care, opens with tales from the days when chiropractors were dismissed as quacks, cultists and charlatans…Unfortunately, in waving the flag for more holistic, naturopathic treatments, the already meandering “Doctored” loses focus…

What Mr. Gold calls “scattered” and “meandering” may refer to the numerous interviews with people who broached the many topics in this whirlwind. I will admit the numerous testimonies from dozens of people made for a rapid litany of hard-to-believe stories of medical failures, arm-twisting, and sheer incompetence. Indeed, medical care for many Americans has become a frightful experience laced with many pitfalls—the makings of this important story.

On the other hand, his review was very sympathetic to chiropractic care. Actually, I was surprised that this critic didn’t take a cheap shot at chiropractic as I expected from a big city, smart aleck, high-brow newspaper critic; instead he heaped praise:

“Doctored” issues indictments of a market-based health system predisposed toward prescription drugs and surgery when less invasive, less expensive methods might be, heaven forbid, more effective. Seeing a series of “frozen shoulder” patients, unable to raise their arms, suddenly regain pain-free range of movement after spinal manipulation is powerful evidence of chiropractic’s worth.

Considering this film is scientifically complex and as well as emotionally compelling, I understand why some viewers may feel as scattered as Mr. Gold. The enormity of this film transcends examples of clinical iatrogenesis, it attacks the cultural authority of medicine itself.  In an interview with the LA Times, this problem was mentioned by the director/writer:

Bobby Sheehan, who directed “Doctored,” believes a documentary subgenre has developed on healthcare films. “I hope there is going to be more of them,” he said. “There are so many problems.”

“Doctored” begins as a documentary examining the chiropractic profession, whose members have long been ostracized by the American Medical Assn., and features interviews with athletes, including former NBA star John Stockton, who had worked with chiropractors for years, but then expands to look at wider issues.

Sheehan admitted that he strayed off his main focus because “my head was so full of new information about how many things are just so wrong.”

“While making this film, we dared go into one too many topics,” he added.

The cinematic-induced vertigo may make some viewers dizzy, but it will also be a sobering event for others. Indeed, there were two RNs sitting next to me at the NYC premiere. Afterwards, I asked them what they thought about the movie and, generally, they were stunned at the reality of the movie. One even said, “I think it’s time I saw a chiropractor.”

As a DC, I would have preferred if the film had stayed exclusively on the medical war against chiropractors and how our brand of spine care has been vindicated by researchers, but the filmmakers had a bigger goal to indict the broken American healthcare system with horrendous examples of medical malpractice, political medicine’s obstruction to progress, drug companies exploitation of “drug whores” as one embittered former drug rep described many MDs, and the overall ineffectiveness of this broken medical system.

This one film should be included in a health policy course for chiropractic students. Although only 143 minutes in length, it is huge with facts, politics, and issues that every clueless chiropractic graduate needs to know. As I said, it will leave them with their eyes wide open after viewing this film and learning about the medical war against chiropractors.

The after-party reception atop a nearby building was nearly as exciting. We were 20+ stories up on the top floor with a view to kill for—in one direction was the nearby Empire State building with other spectacular sights all around. The eeriest feeling came from the transparent four-foot high restraining wall around the top floor that made it seem we were standing without any protection from falling over the edge.

After an hour of schmoozing with the notable characters in the film, the crew, and, of course, the groupies who follow film stars (okay, I’m joking), we took a harried cab ride back to our hotel. Like Cinderella at midnight, our exciting day had finally come to an end.