Dr. Ken Harvey, Adjunct Associate Professor at the School of Public Health and Preventive Medicine at Monash University, and a regular contributor to MJA InSight, and his research partner Mal Vickers have been awarded the Australian Skeptics’ Skeptic of the Year award at the Skeptics’ Annual Convention in Melbourne on 26 November 2016. Dr. Harvey is an executive member of Friends of Science in Medicine. Eran Segev, president of Australian Skeptics, said: “This year the award was issued jointly to Dr. Ken Harvey and Mal Vickers for their continued and highly effective work in exposing claims and practices of chiropractors that mislead and misrepresent the benefits of their activities, and can be dangerous to members of the public”.

Why I’m Skeptical of Skeptics

While the Australian Skeptics organization is handing out awards based on practices “that mislead and misrepresent the benefits” and “can be dangerous to members of the public,” I suggest they ignored the biggest offender of all — their own medical profession.

I’m shocked at the myopia of Dr. Ken Harvey and his Friends of Science in Medicine who ignore their own profession’s failings, instead choosing to embellish issues about chiropractic.

Ironically, this FOS seems more like the Klu Klux Klan of medicine rather than a respectable body of impartial scientists such as the editors of The British Medical Journal. Instead of extolling white supremacy like the KKK, the FOS clearly espouse medical supremacy despite the failings of their own medical treatments.

For example, the unwarranted attack against pediatric chiropractic care was evidence of their witch hunt Down Under despite research showing the effectiveness of chiropractic care for colicky babies that they chose to ignore.[1],[2],[3] The attack on Dr. Ian Rossborough had nothing to do with these facts nor was any baby hurt in this victim-less non-crime. Indeed, his character-assassination proved how despicable these skeptics will stoop to fool the public with blatant misinformation and salacious headlines in the media, facts be damned.

Indeed, if Dr. Harvey is an “anti-quackery crusader” and “serial complainer,” why has he not complained about the much bigger fish to fry that show the proven incompetence and dangers of medical care?

Don’t take my word for this because The British Medical Journal (BMJ) has been at the forefront reporting medical iatrogenesis, an issue conveniently ignored by Harvey and his FOS. In 2016 the BMJ revealed medical care is the third-leading cause of death in the United States in the range of 251,000 per year (that the authors admit is a conservative estimate) that equates to nearly 700 deaths per day due to medical mistakes.[4] I assume these stats are also appropriate and proportional Down Under. 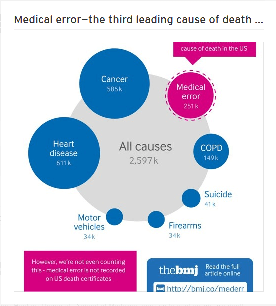 Nor did Dr. Harvey or his FOS sound an alarm about patient safety in 2013 when the BMJ published on its website, Clinical Evidence, another article suggesting 2,000 of 3,000 standard medical treatments were ineffective, unproven or too dangerous to use.[5]

Nor did these medical curmudgeons warn the public about the rash of back surgeries. Spinal Fusion Surgeries Questioned, an article published by the MJA InSight newsletter on April 26, 2016, written by Charlotte Mitchell that was painfully clear the need to stop the tsunami of back surgeries is urgent: 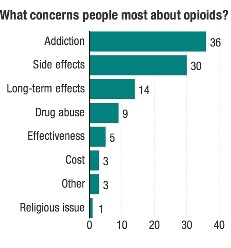 Dr. Richard Williams, orthopaedic surgeon and spokesperson for the Royal Australasian College of Surgeons, told MJA InSight that a key regulation called for a waiting period of 12 months before a spinal fusion surgery was performed, noting “Most patients will recover after these 12 months” without any surgery.

If Dr. Harvey and his FOS are keen on protecting the public about medical methods “that mislead and misrepresent the benefits” to patients, why have they not spoken about this back surgery scam?

Professor Jeffrey Rosenfeld, senior neurosurgeon at the Alfred Hospital and director of the Monash Institute of Medical Engineering,  also mentioned for patients who do not have clear indicators for spinal fusion surgery (the “red flags” of cancer, fracture, infections), a non-invasive multidisciplinary approach is preferable, which includes chiropractors. “This will often give people better long-term pain outcomes than having multiple spinal surgeries.”[6]

This is an example of scientific criticism of a controversial medical treatment that affects millions of people, but this topic failed to gain traction in the mainstream media Down Under by Ann Arnold at “RN”  or Julia Medew at “The Age” who both attacked Dr. Rossborough despite the fact I sent to both of them the science supporting pediatric chiropractic for colicky babies.

Apparently unnecessary spine surgery leaving patients in pain, disabled and living on opioid painkillers is less important to them than pushing the emotional hot button of “baby abuser” to enrage people about pediatric chiropractic care.

Yet another shot across the bow for Dr. Harvey and the FOS occurred in February, 2016, when spine surgery was again deemed “the ultimate placebo” by Australian spine surgeon Ian Harris in his book, Surgery, the Ultimate Placebo: A Surgeon Cuts through the Evidence.[7] Despite this indictment, Dr. Harvey nor his FOS made any comment to warn the public.

According to Dr. Harris, spine fusion is not only ineffective but often leads to complications and, even when it appears to work, it’s usually because of the placebo effect:

“Millions of people have had spine fusions for back pain and I am not at all convinced that the benefits of this surgery outweigh the considerable harms…there is very little evidence that spine fusion surgery for back pain is effective. It is very expensive (the implants alone are often tens of thousands of dollars per case), often leads to complications, often requires further surgery, is associated with increased mortality, and often does not even result in the spine being fused.”[8]

“At an average cost of $100,000 each, I am certainly not convinced that it is worth $50 billion a year. Somebody is winning here and it isn’t the patients.”

An agency of the U.S. Public Health Service advised that only one in 100 cases of low back pain needs surgery,[9] yet this advice has been totally ignored by spine surgeons, prompting The Los Angeles Times in 2013 to publish, “Back Pain, Doctors Increasingly Ignore Clinical Guidelines.”[10]

The research undermining back surgery was supported by another study in 2014 by the Mayo Clinic that conducted a systematic review of 33 worldwide studies since 1990 that confirmed “bad discs” were prevalent in almost every adult, including many who are pain-free.[11] 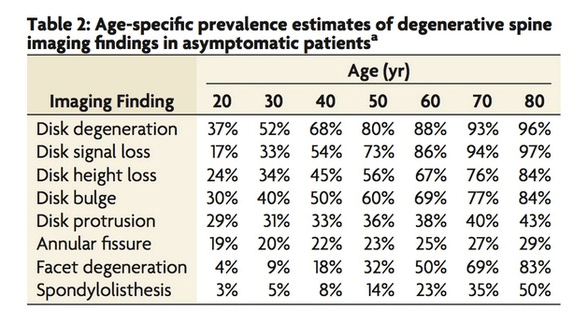 However, this important Mayo Clinic review never went viral in the media nor did Dr. Harvey or his FOS warn the public of this common “bad disc” misdiagnosis used to railroad patients into unnecessary spine surgeries.

Once thought to be the solution for the pandemic of pain, opioid painkillers have now become the leading drug abuse problem worldwide. Donald Teater, MD, medical advisor from the National Safety Council, put this problem quite bluntly, “Opioids do not kill pain. They kill people.”[14]

Not only do opioids kill people, so do most medical spine care treatments compared to chiropractic care. 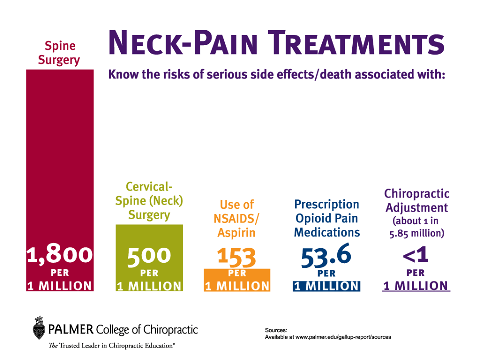 Unfortunately this startling information has yet to make the news and Dr. Ken Harvey, Mal Vickers and the FOS have been purposely mute on this issue—illustrating the disconnect between the rigged media and the latest research concerning the dangers of medical spine care. It also proves their lack of objectivity as so-called scientists.

This is an important issue to discuss since low back and neck pain top the list of disabling conditions worldwide that are exacerbated by medical spine care methods such as opioids, epidural steroid injections, and disc fusion surgery.[15]

Many medical experts have criticized the ineffectiveness of spine surgery, including Dr. Gordon Waddell, orthopedic surgeon and author of The Back Pain Revolution, but once again such criticism fails to make the mainstream media:

“Low back pain has been a 20th century health care disaster. Medical care certainly has not solved the everyday symptom of low back pain and even may be reinforcing and exacerbating the problem…It [back surgery] has been accused of leaving more tragic human wreckage in its wake than any other operation in history.” [16]

Nor has Dr. Harvey mentioned Dr. Waddell’s learned opinion or the benefits of nondrug chiropractic care during this opioid abuse/addiction crisis and the rash of unnecessary spine surgeries. Apparently his skepticism excludes any mention of dubious medical treatments. Is this not a conflict of interest or is it simply bad science?

I daresay a competent ophthalmologist might need to check Dr. Harvey and his FOS concerning their skewed view of chiropractic care although I believe their embedded skepticism is undoubtedly an untreatable psychological dementia and not a visual impairment. Like members of the KKK, medical bigotry is an incurable malady that affects too many MDs.

Dr. Harvey has also avoided mentioning the guidelines from the American College of Physicians, the American Society of Internal Medicine,[17] and the North American Spine Society that now recommend chiropractic care before medical spine care for the vast majority of “mechanical” low back pain cases.[18]

Spinal manipulation has also been found effective as an option for symptomatic relief in patients with lumbar disc herniation with radiculopathy according to the North American Spine Society’s Clinical Guidelines for Multidisciplinary Spine Care, Diagnosis and Treatment of Lumbar Disc Herniation with Radiculopathy.[19] The authors conclude 60% of patients with sciatica will benefit from spinal manipulation to the same degree as if they undergo surgical intervention.

Yet these important guidelines touting spinal manipulation have been ignored by Dr. Harvey and, of course, by his FOS despite the high rate of opioid painkiller abuse used for low back pain[20] and the high cost and clinical ineffectiveness of disc fusion surgery that found two years after disc fusion 75% of patients were unable to return to work and many were still using opioids.[21]

Since Mal Vickers is a “long time member of Victorian Skeptics and an indefatigable net surfer who exposed hundreds of websites of chiropractors who made unsubstantiated claims online,” I invite him to visit my website, Chiropractors for Fair Journalism, to learn the chiropractic perspective in an objective manner, something that will certainly be new to him.

In the meantime, I suggest these skeptics stop throwing stones at chiropractors or any other CAM providers before they first clean up their own house!