I’ve stopped believing in Santa Claus, not because he’s merely a fictional character, but because he’s a bad role model for kids. Santa’s been on a slippery slope for decades, and I don’t mean a snowy hillside that might be dangerous for him or his red-nose Rudolph and reindeer.

Instead, Santa has been on a path of self-destruction for years and, if the latest TV commercial is right, he’s now on a slippery slope to drug addiction. This revelation certainly comes with trepidation since he’s the most lovable and charitable chubby character who is worshiped by children around the world.

Now Santa needs our help as chiropractors or else Christmas may be in jeopardy if his addiction turns to a deadly dose from painkillers as it has for thousands of Americans.

Aside from being a toy manufacturer at the North Pole, he’s also portrayed as a godfather of sorts who wields great power over kids. Indeed, no one wants to get on the “bad list’ of this jolly godfather.

You’ve heard of this heavy-handed description of him in the old Christmas song, Santa is Coming to Town, that clearly warns kids that Santa’s “taking names by making a list, checking it twice; he knows if they been bad or good; and he’s gonna find out who’s naughty or nice. So, you better watch out, you better not cry, you better not pout, because Santa Claus is coming to town.”

Santa as the godfather from the North Pole makes kids a deal they can’t refuse—either behave or else he just might leave them a lump of coal, so “be good for goodness sake.”

Not only is Santa taking names, this red-faced corpulent man in the red suit is also a very bad image of health for our kids. 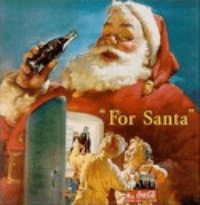 Just looking at his cherub face tells us he may be hypertensive from eating too many sugar cookies left for him on Christmas Eve and his big, bloated belly may also be caused by a milk allergy from all the kids at every home who leave him a glass to drink.

Poor Santa—after years of an unhealthy diet and living a hard life isolated at the North Pole, by now he is obese as well as a borderline diabetic on the brink of a heart attack or stroke! Indeed, Santa has issues!

Cookies and milk are not the only problems Santa has had through the years. This lovable shill has long been associated with many other bad habits.

Like me, you may be old enough to remember the old magazine ads showing this portly patron guzzling Cokes, chugging on booze, and puffing on tobacco.

Not to be outdone by Christmas past, this year’s advertising has introduced a new vice for Santa. Instead of Santa smoking, drinking liquor, or sugary drinks, now we see Santa is on a slippery slope to dangerous and addictive painkillers. 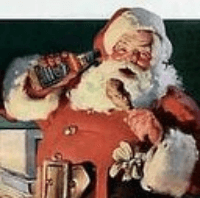 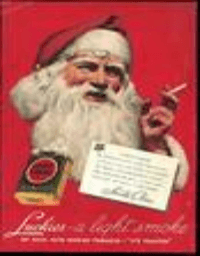 For example, during this Christmas season we’ve seen the broadcast of an Aleve holiday commercial using Santa suffering with back pain.

This warm and fuzzy TV commercial shows Santa “all stove up” with his back aching presumably from lifting his bag of toys. Instead of the typical glass of milk and plate of cookies, in this new TV ad a parent leaves Santa a bottle of Aleve (naproxen) while the narrator touts “all day pain relief with just two pills.”

Just think of the magnitude of this celebrity’s endorsement–forget about old jocks or actors, Santa is bigger than a rock star who everybody worldwide aims to please, so you better do as he says!

This ad may seem innocent to viewers, but Bayer, Aleve’s manufacturer, fails to warn them of the dire consequences of the prolonged use of this OTC drug, such as heart attack, stroke, or death. The National Institutes of Health website, PubMed Health, clearly warns about Aleve:

People who take nonsteroidal anti-inflammatory drugs (NSAIDs) (other than aspirin) such as naproxen may have a higher risk of having a heart attack or a stroke than people who do not take these medications. These events may happen without warning and may cause death. This risk may be higher for people who take NSAIDs for a long time.

The NIH has also suspended the use of Aleve (naproxen) in an Alzheimer’s trial due to concerns over the alleged 50% increase in heart attack and stroke risk.

Television standards no longer allow showing Santa drinking liquor or smoking cigarettes, so why is popping pain pills allowed when they pose a serious threat, too?

Despite these serious problems, Bayer uses the image of Santa to imprint upon children and parents that this dangerous remedy is without any possible side effects. Instead, Aleve saves Christmas for kids by helping Santa’s backache. Maybe Bayer should re-write the Christmas classic movie with Jimmy Stewart, “It’s a Wonderful Life”, and have Aleve save the Christmas spirit instead of George Bailey.

Since we know no drug will correct any back pain problem, when his pain persists after using Aleve, ol’ Santa will probably seek stronger drugs just as millions of people do daily. This is the slippery slope to opioid addiction many thousands of adults may experience as they go “doctor shopping” to find “pill mills” for “hillbilly heroin”—OxyContin, Hydrocodone, Percocet, etc.

The impression for kids that Santa takes drugs for his back pain is a terrible precedent to set considering the onslaught of deaths and addiction caused by opioids for chronic pain. You can understand the danger from this TV commercial that may result later in life for many on this slippery slope to prescription painkillers as it already has for millions of Americans suffering from back pain.

Indeed, life may be temporarily wonderful for the millions of drug addicts with easy access to MDs who have replaced street corner drug dealers as the pipeline for narcotics, but eventually unless they change paths, this slippery slope may lead to death as it has for 37,000 Americans annually.

Ironically, this jolly ol’ red-faced Santa may actually be an opioid drug addict stoned on OxyContin, which may suggest why he is so jolly—ho, ho, ho!

Maybe Santa should move from the North Pole to Washington State or Colorado where he can legally obtain medical marijuana for this chronic low back pain. At least it’s safer than narcotics!

And, if Santa is really smart, he might see a chiropractor, too!

Pot and pops are better solutions to back pain than opioid drugs, dangerous epidural shots, or ineffective spine surgery based on an outdated disc theory.

So, you better watch out because this naughty Santa Claus is coming to town to get inside your home. And be sure to lock access to your bathroom medicine chest just in case his back is acting up.