RE: Response to your article in Becker’s Spine Review:

Seven spine surgeons weigh in on the most common stigmas surrounding spine surgery and how they deal with patients who misconstrue spine care.

I enjoyed your article, but found there were many problems with the questions as well as the answers given, so as a 35-year chiropractor and journalist, let me respond.

First of all, “misconstrue spine care” may be inaccurate considering people can see the failed back surgery patients among their friends and family. Perhaps surgeons, not patients, are those who misconstrue this issue as the following research studies suggest.

Enjoy my response to the points made by the surgeons.

Question: What are some common misconceptions patients have about spine surgery and how do you correct those assumptions?

Again, I find it most interesting that public opinions about back surgery are considered “misconceptions.” Do the surgeons think these misconceptions arise from nowhere, ignoring the studies and the public surveys? People know what’s happening despite the surgeon’s denial.

Alden Milam, MD. Spine Surgeon at OrthoCarolina (Charlotte, N.C.): The most common misconceptions are “spine surgery never works” and “many people are worse after spine surgery.”

Jeffrey C. Wang, MD. Co-Director of the USC Spine Center at Keck Medicine of USC (Los Angeles): The most common misperception is that spine surgery does not work. There is clear evidence that spine surgery for definitive pathologies is beneficial, and for many problems, superior to conservative treatments with outstanding outcomes.

Once again, the research refutes the hyperbole offered by Dr. Wang:

Edward Rustamzadeh, MD, PhD. Spine Surgeon at Premier Brain and Spine Institute (San Jose, Calif.): Unfortunately, spine surgery has one of the worst stigmas associated with a specialty in all of medicine. I believe this has to do with the misinformation that is readily available to patients at a click of a keyboard.

While fake news is rampant on the internet, there are also legitimate studies to be found, such as:

He is correct spine surgeons are wrong in many of their assumptions.

For example: Nancy Epstein, neurosurgeon and editor at Surgical Neurology International (SNI), suggested, “Increasingly, patients, spine surgeons, hospitals, and insurance carriers should not only be questioning whether spinal operations are ‘unnecessary’, but also whether they are ‘wrong’ (e.g., overly extensive, anterior vs. posterior operations) or ‘right’ (appropriate).”

Kern Singh, MD. Co-Director of Minimally Invasive Spine Institute at Midwest Orthopaedics at Rush (Chicago): Some of the biggest misconceptions that I hear about spine surgery are that it doesn’t work or that there is a high risk of complications.

In fact, there is a high risk of complications:

While Dr. James may be correct, he ignores the “elephant in the operating room” unmentioned by these spine surgeons—the debunked ‘bad disc’ diagnosis as the primary cause of back pain that came to light in research 27 years ago but remains invisible:

The Mayo Clinic review was clear that ‘bad discs’ were part of the normal aging process, highly prevalent in people of all ages, often unassociated but coincidental with pain, and did not alone constitute the need for surgery or needle jockeys:

J. Brian Gill, MD. Spine Surgeon at Nebraska Spine Hospital (Omaha): Some common misconceptions that I hear from patients are that back surgery does not work and people are worse than where they were prior to surgery.

To the contrary, research suggests the majority of spine fusion patients cannot return to work after two years of recovery:

“Our study is support of the conclusion that DDD is a questionable indication for spinal fusion. Given the generally poor outcomes of this study, future studies should determine if lumbar fusion surgery is an effective treatment modality in similar patients.”[8]

Brian R. Gantwerker, MD. Founder of the Craniospinal Center of Los Angeles: Unfortunately, one of my favorite Bulls players from the 90s dynasty, Steve Kerr, had a really difficult time and continues to have problems. Many patients’ first words are: “I don’t want to have surgery.” That’s fine and I don’t get discouraged. Their common misconception is that I am going to want to operate on them before they even sit down for the consult. I take my time, get updated studies and make sure the indications are there. And a majority of the time, I don’t operate on them.

As a 35-year chiropractic practitioner myself, let me ask Dr. Gantwerker if he recommends hands-on spinal manipulation before surgery? Perhaps Coach Steve Kerr could have avoided failed back surgery if he had tried chiropractic beforehand.

According to an April 24, 2017, article in the Washington Post, How Agonizing, Persistent Back Problems Are Threatening Steve Kerr’s Coaching Career: “Kerr has tried everything, including conventional medicine, yoga, meditation, marijuana, exercise and sheer willpower. Nothing has worked.”

Oddly, no mention of chiropractic care despite the numerous guidelines recommending this brand of spine care before surgery—perhaps another example of chirophobia (medical bias against chiropractors) or the lack of informed consent to tell patients of their options to surgery.

According to the American College of Physicians guidelines, before surgery is considered (except for the red flags), patients should be treated first with conservative care such as spinal manipulation, acupuncture, massage therapy, to name a few of CAM methods.

Another “elephant in the room” ignored by these spine surgeons was any mention of chiropractic care that has now been shown to be helpful to avoid surgery in the first place as well as helpful for FBSS victims after their surgery: 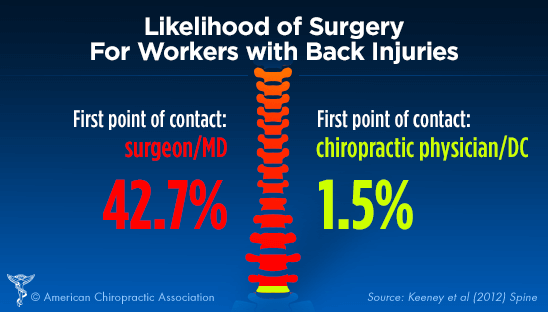 Not only are many patients misdiagnosed, often mistreated, and routinely misinformed about chiropractic care, they are not told there is a chance of natural reduction for many herniated discs and to wait before surgery:

Not only are many herniated discs able to heal without intervention, patients are also rarely told by MDs there are effective nondrug and nonsurgical multidisciplinary treatments available by conservative care practitioners as the guidelines now recommend:

With this litany of research supporting SMT and conservative care over medical spine care, the call for a moratorium grows louder and explains why on April 26, 2016, the Medical Journal of Australia InSight newsletter published, Spinal Fusion Surgeries Questioned, was painfully clear on the need to slow the tsunami of back surgeries with a moratorium as many other spine leaders have urged:

Even the renowned medical curmudgeon, NM Hadler, MD, author of Stabbed the Back, mentioned the need for a moratorium:

“Prominent investigators from various disciplines have taken pen in hand and published articles in very prominent medical journals calling for a rethinking of the use of surgery in regional low back pain, if not a moratorium on laminectomy/discectomy with or without fusion.”

I realize your Spine Review is primarily written to encourage medical spine care treatments, but in light of this litany of research, don’t you think you should write more “fair and balanced” articles?

I would enjoy your response this article.