Without a doubt, not all are enamored by Obama’s goal to bring universal healthcare to every American, especially those in the medical cartel profiting dearly with the present system. Sadly, we see the AMA doing the same things it did over the last 100 years when Morris Fishbein, the AMA’s executive director, and chief propagandist politicked against “socialism” in healthcare such as the private Kaiser Permanente Hospitals or the national programs that emerged in post-WWII Europe during the 1940s, and in the 1960s with Medicare/Medicaid.

Fishbein warned the public against “peasant medicine” and “medical Soviets” as far back as 1939:

…all forms of security, compulsory security, even against old age and unemployment, represent a beginning invasion by the state into the personal life of the individual, represent a taking away of individual responsibility, a weakening of national caliber, a definite step toward either communism or totalitarianism.[1]

When Harry S. Truman attempted in the 1940s to create a national health insurance system, he encountered a well-organized and financed opposition that included insurers, large corporations, the American Medical Association—the usual conservative interests of the time.

President Truman proclaimed in January 1949: “In a nation as rich as ours, it is a shocking fact that tens of millions lack adequate medical care.” Harry Truman’s prescription: “We need—and we must have without further delay—a system of prepaid medical insurance . . .” That system, he said, must be national and compulsory, based on a payroll tax. [2]

Federal Security Administrator Oscar Ewing backed up his boss with an elaborate report entitled The Nation’s Health. Ewing declared: “Every year, over 300,000 people die whom we have the knowledge and the skills to save … By & large, only the well-to-do and, to a certain extent, charity patients, get satisfactory medical care.”

More specifically, said Ewing: “A scant 20% of our people are able to afford all the medical care they need. About half our families—those with incomes of $3,000 or less—find it hard, if not impossible, to pay for even routine medical care. Another 30% of American families with incomes between $3,000 and $5,000 would have to make great sacrifices or go into debt to meet the costs of a severe or chronic illness.”

In the Red-baiting language of the day, their PR experts introduced the phrase “socialized medicine” into the public lexicon to scare the public. Truman was forced to retreat in the face of this “anti-socialism” campaign.

When John F. Kennedy became President in 1961, he began to work for comprehensive health coverage for both elderly and low-income Americans, what later became Medicare and Medicaid, and again found himself at loggerheads with the AMA.

Rather than containing the battle to Capitol Hill, the medical cartel used the media to distort the issue of universal healthcare for seniors and the poor with distortions, fears, and worries that have come to typify its modus operandi to use classic demagoguery to misrepresent the issues, mischaracterize their opponents, and suggest “nightmarish scenarios,”[3] and “confusing claims and outright distortions have animated debate about changes in the healthcare system”[4] in TV ads and radio talk programs to frighten people to vote against such measures. 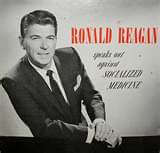 In the 1960’s Medicare’s opponents included not only the medical cartel, but it also launched Ronald Reagan’s political career and arguably invented ‘viral marketing.’ Reagan was hired as part of a covert campaign to

undermine support for Medicare and Medicaid and “Operation Coffee Cup” was born.[5]Reagan recorded 3,000 copies of an LP (“long playing” record), “Ronald Reagan Speaks Out Against Socialized Medicine.” The AMA sent it to the “Women’s Auxiliary” of the Medical Association in each county. These ladies were instructed to “put on the coffeepot,” play the record for their friends and fellow physicians’ wives, and then get out the stationery so that each of them could write personalized letters to their Senators and Congressmen.

Its 82,000 members undertook a variety of educational, charitable, community service, and public relations tasks on behalf of the AMA. In the spring of 1961, the Women’s Auxiliary was asked to launch a special high-priority initiative under the title of WHAM, Women Help American Medicine. The avowed aim of WHAM was bluntly stated as:

“This campaign is aimed at the defeat of the King-Anderson bill [forerunner of the Medicare bill] of the 87th Congress, a bill which would provide a system of socialized medicine for our senior citizens and seriously curtail the quality of medical care in the United States.”[6]

The event was something of an inside job. Although, as the promotional material stated, Reagan was a willing volunteer to speak about the evils of socialized medicine, since his father-in-law, Dr. Loyal Davis, was the president of the AMA. Operation Coffee Cup produced thousands of letters, which helped narrowly defeat a Medicare bill in the Senate later that year, although Medicare was ultimately passed and signed into law by President Lyndon Johnson in July 1965.

In his 20-minute passionate recording, the host of television’s “Death Valley Days” excoriated what he called “the foot-in-the-door” leftist technique that, he noted, was “one of the traditional methods of imposing statism or socialism on a people … by way of medicine.”[7]

There was no public announcement of the recording or of “Operation Coffee Cup.” The idea was to make it seem as if the letters were spontaneously written by distressed citizens. Portions of the recording were also reportedly broadcast as radio commentary.

Reagan no doubt terrified many of his listeners with his conclusion, telling them that if they did not prevent the passage of Medicare, “one of these days you and I are going to spend our sunset years telling our children and our children’s children what it once was like in America when men were free.”

This was a very imaginative tactic designed to appear spontaneous rather than organized and well-funded. It used word-of-mouth communication backed by prepackaged “talking points” from the AMA.

Operation Coffee Cup was kept deliberately low-key and internal to the AMA, its Women’s Auxiliary, and the trusted friends and neighbors of the Auxiliary women. Reagan’s efforts against Medicare were revealed, however, in a scoop by Drew Pearson in his Washington Merry-Go-Round column of June 17, 1961. Pearson titled his item on Reagan, “Star vs. JFK,” and he told his readers:

Ronald Reagan of Hollywood has pitted his mellifluous voice against President Kennedy in the battle for medical aid for the elderly. As a result it looks as if the old folks would lose out. He has caused such a deluge of mail to swamp Congress that Congressmen want to postpone action on the medical bill until 1962. What they don’t know, of course, is that Ron Reagan is behind the mail; also that the American Medical Association is paying for it.

Reagan is the handsome TV star for General Electric . . . Just how this background qualifies him as an expert on medical care for the elderly remains a mystery. Nevertheless, thanks to a deal with the AMA, and the acquiescence of General Electric, Ronald may be able to out-influence the President of the United States with Congress.[8]

The “Socialized Medicine” record was Ronald Reagan’s first venture into political speech and his efforts in “Operation Coffee Cup” were so well-received that he was invited to give a speech for presidential candidate Barry Goldwater at the 1964 GOP Convention.

Medicare and Medicaid were finally passed under Lyndon Johnson’s Presidency in 1965. Even Morris Fishbein’s position had changed dramatically by then when he was quoted as saying “when conditions become so severe they can no longer be handled by private initiative, the government must step in.” [9]

According to TIME magazine, the AMA membership was still adamantly opposed Medicare in 1966 at its convention.

It was an ironic accident of timing. The American Medical Association’s 115th annual convention in Chicago last week wound up just in time for the doctors to go home to deal with the consequences of Medicare, the social security-administered medical insurance that so many of them had fought against so vehemently and so long. Awareness that Medicare would become official on July 1 made its potential problems Topic A all through the convention. As he took over the office that he will hold for the next twelve months, the new president, Dr. Charles Hudson, a Cleveland internist, counseled moderation. “There are people who think doom is going to fall in on us,” he said. “I think this opinion is not justified. We are not stepping off the brink into a bottomless pit of professional destruction and despair.” He proposed that doctors “make the most of this new program.” If they do, he suggested, they may help “prevent its extension toward a national health service.[10]

Is it any wonder that the Republicans, the AMA, and insurance companies still oppose healthcare reform considering the history of Medicare, a program that has helped millions of senior Americans? If it had been up to Reagan and the medical cartel who wanted to kill Medicare, nearly 50 million more Americans would be uninsured or underinsured, adding to the 75 million already in this situation.

It is apparent the medical cartel likes the present system believes healthcare is a commodity to be sold with outlandish costs, practically no competition with its monopolistic control, and acting as the 4th and unelected branch of government.

Obviously if America is to heal itself, it starts with leadership that believes healthcare is a right, not a privilege for the rich. Sadly, this attitude has not reached the medical cartel that continues to oppose reform and the public option.