The ongoing medical war against chiropractors in the media reminds me of a quote attributed to former U.S. Sen. Richard Russell from Georgia who once told his opponent during a debate, “If you’ll quit telling lies on me, I’ll quit telling the truth on you.”

I doubt the medical misinformers will voluntarily stop telling lies about chiropractors—there is just too much money at stake to tell the truth; and I will not stop telling the truth about medical bigotry or the “national scandal” of medical spine care as long as chiropractors are marginalized and patients railroaded into drugs, shots and unnecessary surgeries.

Follow the money, not the guidelines, is the medical mantra today.

However, facts alone will not change the medical prejudice against chiropractors, just as racism did not cease after the Civil Rights Act. Before chiropractors find their rightful niche in America’s healthcare system as the primary spine providers, the public needs to understand this complex issue as a psychologist might explain it.

Robert B. Cialdini, PhD, in his book, Influence, the Psychology of Persuasion, gave insight regarding how public opinion is formed and how to influence it. According to Cialdini, public opinion is characterized as a “click/whirr” stimulus-response situation.

In our case, “click” on the topic of chiropractic and then “whirr,” out rolls the prerecorded medical tape – that is, the propaganda the public has heard and the complicit press has printed for nearly a century, emanating from the medical misinformers, originating with the Medical Mussolini and later in the 1960s from the hired shills by the AMA’s Committee on Quackery (CoQ).

The lack of medical evidence to undermine chiropractic was noted in 1978 by the New Zealand Royal Commission of Inquiry into Chiropractic:

“In the first place no evidence was placed before us which suggested that medical science has proved current chiropractic theory to be in error, or the practice ineffective. We have no doubt at all that if such evidence had been available, it would have been produced.”[1]

Let me be perfectly clear: This original “click” did not stem from any scientific facts disproving chiropractic care, nor from the opinion of researchers, experts or academicians, nor from state or federal health authorities. Nor did the public protest chiropractors; in fact, the public often resorted to public displays of support when their local chiropractors were arrested. 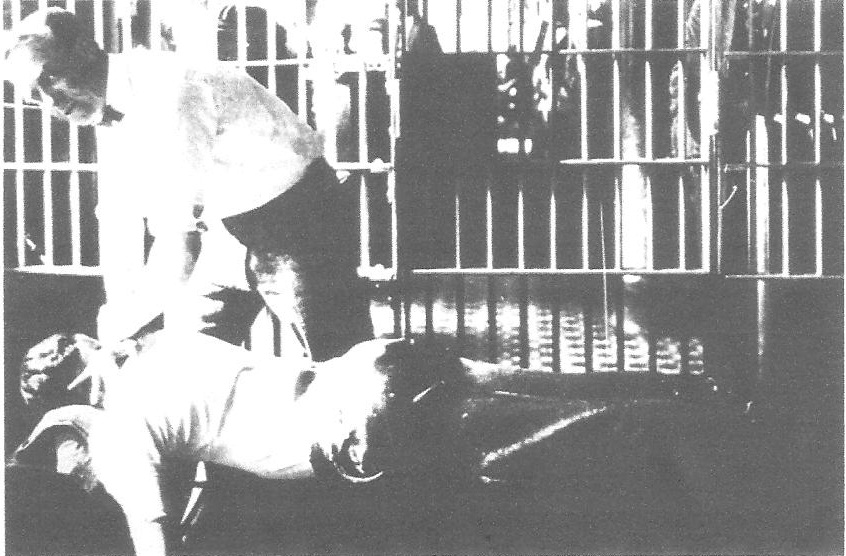 This medical persecution stemmed solely from the evil mind of the Medical Mussolini and was continued by the poisonous pens hired by his successors in the CoQ, prolific in spewing epithets to demean the reputations of chiropractors in order to control what now has become a nearly $100 billion back pain industry.

Today, this defamation campaign continues covertly. This is not merely my opinion, but legal fact. In her Opinion at the Wilk v. AMA antitrust trial, Judge Susan Getzendanner spoke about the “whirr” damage done to chiropractors’ reputations by the AMA’s propaganda campaign:

“The activities of the AMA undoubtedly have injured the reputation of chiropractors generally…In my judgment, this injury continues to the present time and likely continues to adversely affect the plaintiffs.  The AMA has never made any attempt to publicly repair the damage the boycott did to chiropractors’ reputations.”[2]

Let’s be honest: No other profession has endured the massive defamation campaign as chiropractors have suffered at the hands of the AMA; a campaign that “continues to the present time and likely continues to adversely affect the plaintiffs.” It was an illegal, albeit effective ploy to destroy a competitor’s image in order to capture the spine care market, and explains just one reason why Harper’s Magazine once dubbed the AMA as “the most terrifying trade association on earth.”[3]

It is past time to openly address the medical prejudice against chiropractors and the related media indifference to confront this embedded bias that I have coined “chirophobia” — the irrational fear, antipathy, contempt, prejudice, aversion or hatred of chiropractors instilled by decades of organized medical propaganda.

Remarkably, for more than a century, the mainstream media has never mentioned the benefits chiropractors bring to a society riddled with chronic back pain amendable to manipulation; nor has the media acknowledged the studies by authorities who openly criticize medical spine care that has become a “national scandal.”[4]

This is yet another “elephant in the newsroom” — the disconnect between the consensus in scientific journals and the vacuum in the mass media that illustrates the bias toward chiropractic care (for reasons I will soon discuss).

Without question the public is clueless about the impact of chirophobia. Similar to any bias, the public has no conscious thought of the dubious origin or accuracy of this medical muck about chiropractors — it’s just a belief that floats around our society like the flu bug, ready to infect anyone without immunity from such medical nonsense. Like Typhoid Mary, too many MDs and biased reporters keep the germ of medical bigotry incubating among Americans.

For more than a century, the AMA has resembled a “medical mob” that bullied its foes with bogus incarceration by its legal cronies, became wealthy originally by jumping into bed with Big Tobacco and now with Big Pharma, hired yellow journalists to slander chiropractors in the media, and partook in political skullduggery to influence legislators.

No leaf was left unturned in the medical war to demean chiropractors in order to sway public opinion. The AMA did everything it could to blackball chiropractors, from destroying their public image with blatant propaganda “Quack Packs” in the media, schools and in legislatures; to boycotting chiropractors’ presence in hospitals and social groups like Rotary Clubs; to limiting their role in the mainstream healthcare delivery system such as workers compensation programs, Medicare, the Veterans Administration, and military health programs — even after they were legally included by acts of Congress.

Just as in the movie “The Godfather” (1972), Marlon Brando played the role of the original godfather, Don Vito Corleone, the medical Goodfellas also had its original godfather, Morris Fishbein, MD, who led the AMA with his malicious leadership and poisoned pen for more than a quarter of a century, from 1924 to 1949.

Chiropractic historian, Russell Gibbons, recognized the impact of Morris Fishbein who was “the most important non-chiropractor to influence the chiropractic profession.”[6] Fishbein’s influence was not only directly as a foe in the political arena that created the medical profession as the de facto fourth branch of government, but also as the evil genius who orchestrated the massive public relations campaign to destroy the image of chiropractors.

Fishbein’s despotic motto was made quite clear in 1925 when he wrote, “Scientific medicine absorbs from them that which is good, if there is any good, and then they die.”[7] 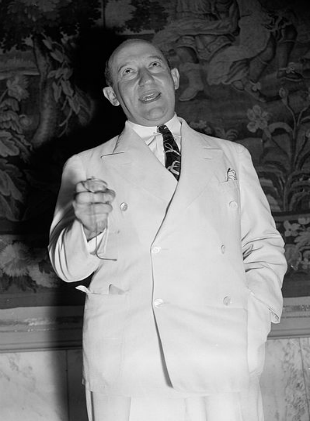 Fishbein ran the AMA with the tyrannical leadership of a Mafioso crime boss and was duly dubbed the Medical Mussolini by his contemporaries, a moniker he wore with pride. He characteristically donned the appearance of a godfather at official events sporting an iconic double-breasted white gangster suit.

His defamation campaign created the contrived image chiropractors now face. The medical stigma of chiropractors as an “unscientific cult” was Fishbein’s brainchild, eventually resulting in an antitrust case, Wilk et al. v. AMA et al., in 1976, as discussed at length in my first book, The Medical War Against Chiropractors.

Aside from his political skullduggery, his poisoned pen became the greatest weapon of this mob boss, the mastermind of the AMA’s propaganda campaign against chiropractors and every non-allopathic health profession.

Fishbein admitted, “The AMA had no public or press relations when I came.” He gave the AMA a loud voice in the media, and it was a vitriolic one, especially for those who crossed swords with him. His frequent, loud attacks were broadcast far and wide, in part through his own syndicated column in nearly 1,000 newspapers as well as via a weekly radio program heard by millions of Americans.[8]

Fishbein became the foremost medical political spokesman of his time; he understood the importance of print and broadcast media, and utilized it to the fullest to influence legislators.  He was a frequent contributor to popular magazines such as the American Mercury, Collier’s, Cosmopolitan, Good Housekeeping, McCall’s, Reader’s Digest, and the Saturday Evening Post.

Fishbein authored 22 books between 1924 and 1947, three of which — The Medical Follies, The New Medical Follies (specifically, osteopathy, homeopathy and chiropractic) and Fads and Quackery in Healing—sold 3 million copies.[9]

Most Terrifying Trade Association on Earth

In 1932 the AMA board officially adopted Fishbein’s goal to destroy chiropractic, according to historian Walter Wardwell:

“Eight years ago officials of the American Medical Association met in secret conclave in Chicago and adopted the slogan ‘Chiropractic must die.’  They gave themselves ten years in which to exterminate it.”[10]

The Medical Mussolini made no bones about his position on the autonomy of his medical profession:

“We insist that the practice of medicine is a doctor’s problem. The doctor is the only one entitled by training, by experience, and by law to take care of the sick. Medicine is still a profession. It must never become a business or a trade, never the subservient tool of a governmental bureaucracy.”[11]

Certainly Fishbein was prophetic that the AMA must never become a “subservient tool of a governmental bureaucracy,” but he was obviously wrong that medicine “must never become a business,” inasmuch as the medical industrial complex is now a nearly $3 trillion annually enterprise — best described as a medical monopoly.

According to a 1938 issue of Fortune, he “promoted the AMA from a mild academic body into a powerful trade association.”[12] In 1939, M.A. Bealle, author of Medical Mussolini, described the vast power of Morris Fishbein:

By the end of Fishbein’s reign of terror in 1949, his huge impact as a power broker was undeniable, as summarized by writer Milton Mayer in Harper’s magazine:

“In the course of thirty-seven single-minded and single-handed years, he had converted a panty-waist professional society into the most terrifying trade association on earth.”[14]

As a result of Fishbein’s poisoned pen, fueled by a bulging war chest funded by tobacco money and enabled by unparalleled political and media power, his anti-chiropractic message reached millions of people and influenced thousands of legislators, essentially turning the medical profession into the most powerful special interest on Capitol Hill, mean-spirited, self-serving and definitely not in the public’s interest.

“The AMA has built a fortress around medical care in this country. They have achieved their fortress illegally,” said George McAndrews, attorney for the chiropractic plaintiffs at the Wilk v. AMA antitrust trial.[15]

And so, it remains today with the current medical monopoly.

[note: you can read more exciting prose in my book available on Amazon]

[6] RW Gibbons, “From Quacks To Colleagues?” Viewing the evolution of orthodox tolerance of deviant medical practice, Journal of Chiropractic Humanities 4/1 (1994):61-71.