Muckraking in the Media

By now almost everyone in the western world has read about the unfortunate death of Playboy model Katie May that quickly became an even worse PR event than the pediatric chiropractor Down Under who was convicted in the court of public opinion for his victim-less non-crime.

Certainly these two incidents were a huge blow to the image of our profession. Inexplicably, we are still attacked by media medical trolls as “unscientific cultists” threatening “public safety,” now we are portrayed as both “baby abusers” and blamed for the death of a Playboy model.

What will you say when the local media or your patients ask you about the accidental death of this Playboy model? Don’t feel a similar accusation couldn’t happen to you because every DC is vulnerable to similar media attacks; if not personally blamed, we are all guilty by association.

No matter what you say, the prejudice from these articles gone viral makes it impossible to convince the majority of people that it was a rare accident (1 in 5.85 million adjustments) and certainly a lower rate than the 2,507 people per million who are seriously injured or die from medical spine treatments.

As to be expected, a patient recently told me a local neurologist has Katie May articles all over his waiting room to frighten patients from seeking chiropractic care. Another long-time patient of mine told me a good friend warned him that “chiropractors will mess you up.” If this were to happen in your office, are your patients able to defend you?

Sadly, we can expect similar reactions in many medical offices to scare patients away from seeking our care. “Don’t come crawling back to me if you’re dumb enough to go to a chiropractor—you don’t want a stroke, do you?”

Realistically, the baby colic issue Down Under and the Katie May accident have done irreparable harm to our image.

Our situation is similar to other PR catastrophes such as Chipotle’s recent history—the food safety scares and the executive cocaine ring scandal. You may recall when an E. coli outbreak hit its restaurant in Simi Valley, California, leading to 234 documented cases of the illness between customers and employees. After an ill-fated attempt to conceal this outbreak, Chipotle developed a PR program to regain its reputation.

British Petroleum (BP) also took a nasty hit on its image after the Gulf Coast oil spill and implemented a similar campaign.

Wells Fargo has developed a mea culpa advertising campaign to restore its image after the revelation of fake accounts. You may have seen recently the TV spot featuring a stagecoach in slow motion, part of a public-relations campaign that includes Internet and newspaper advertisements as the firm tries to convince customers it’s putting their interests first. Too little, too late, don’t you think?

So, what is the short-term and long-term strategy to overcome this blow to our brand? Please don’t tell me a 3-paragraph press release will accomplish restoring our good reputations.

Our good work over the decades went down the tubes in one fell swoop from this sensational tabloid story. If this tragic event and media coverage doesn’t scream for the need of a PR Workshop, what does?

Hopefully you’ve seen the new Katie May ChiroSecure video narrated by Dr. Gerry Clum concerning the latest evidence in this case and correcting many initial issues that apparently were wrong, such as her having a “brutal fall” as reported by TMZ.com.

Fortunately NCMIC funded the The Bone and Joint Decade 2000–2010 Task Force on Neck Pain, led by Dr. Scott Haldeman, that produced the quality research such as the  David Cassidy study, Risk of Vertebrobasilar Stroke and Chiropractic Care, which was groundbreaking concerning the issue of stroke and manipulation:

As to be expected, the media failed to mention this study, so much of the public’s opinion comes solely from the tabloid media partaking in what I refer to as Chicken Little journalism—sensational muckraking by biased and/or uninformed reporters.

Dr. Clum mentioned one point in his slide show that illustrates the great need for our profession to develop a PR Workshop for such instances:

Putting the reaction to this case in context as a chiropractor

I agree with Dr. Clum not to “enter the fray”, but this problem also shows why we need “media training” immediately so more DCs can enter the fray to fight back. We need a PR Boot Camp to get every DC in shape to fight in this media war against our profession. We cannot keep dodging these bullets hoping to survive. Indeed, our profession is bleeding profusely but we have only band-aids to help in this one-sided battle since we have not defended ourselves with an effective strategy before or after this recent attack.

The idea of a PR Workshop is not new. Dr. Lou Sportelli and Mr. Irv Davis orchestrated two similar events in 1981 and 1987, called “PRobe,” to train DCs in public speaking, understanding media inner-workings, and polishing up your image. 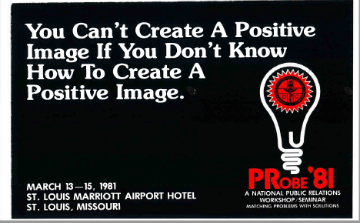 According to Dr. Sportelli:

“I think the PR workshop is an excellent idea. 35 years ago I initiated the first PR program in the country.  It was called Probe 81, it was an enormous success, and then died because of a lack of leadership and organizational commitment, as well as other groups exploiting the PR issues.  Of course I am in favor of media training and media education…and have been all my career.”

I also asked Dr. Sportelli if he thinks it’s appropriate to suggest the $1.4 million from annual donations in the F4CP’s coffer should be used to sponsor such a PR Workshop. Never before has our profession had such a war chest:

“I think it would be logical to suggest to the F4CP it might consider a specialized program in light of the recent headlines [Katie May’s death], but also because the Foundation is gaining membership, prestige, and credibility that they might consider focusing on various media issues such as:

I asked Dr. Sportelli if the F4CP is steadfast on only newspaper ads, a criticism I’ve heard from other colleagues:

“I have no idea, but do not discredit newspaper ads…that is a big part of what they feel is important and what they can show is actually being done. Nothing wrong with that, but there is always more that can be added to the menu.

“Jim, I have been around this media world for a long time, there is no silver bullet…everything works in some way in some % in some areas for some people.  It is never an ‘all or none’ situation.  Approach your request with the menu proposition, that the F4CP can become the media experts to not only PROVIDE positive press, but to train and teach the rank and file how to obtain positive press.”

“Obtaining positive press” means “earned media” where the news media produce programs about our profession for free instead of “paid ads.”

Obviously we do not have to re-invent the wheel since Dr. Sportelli has already blazed the trail. After a 35-year sojourn, it’s time to re-engage with another “PRobe 2017.”

Once again, I urge the leadership at the ACA, WFC, ACC-RAC, and F4CP at the upcoming world conference to hold a PR Workshop by gather consultants, media experts and those DCs experienced in PR matters to discuss such issues to train our PR brigade in the future.

If you agree with Dr. Sportelli and me about hosting another “PRobe” event, send an e-mail to the ACA, ACC-RAC and F4CP to let them know you would like to attend such a workshop at the upcoming Washington combined conference.  This can get done, the need is paramount, we have the time to organize it, but we need the commitment from our leadership to make it happen.