RE: You Can’t Say That! Is It Time to Write the Epitaph for Epithets? by Glen Martin

Letter to the Editor

“Pity the poor bigot. The racist, the homophobe, the sexist… most people respond negatively to derogatory comments based on race, ethnicity, gender, disability and sexual orientation. It’s simply not done—unless, of course, you are…”

At this point let me insert: “an MD calling chiropractors by the q-word (quack).”

I was first introduced to this epithet after sustaining a serious back injury while playing football at Cal in 1968 in a game against Syracuse when I was blind-sided by a 230 pound defensive end who drove me into the ground, misaligning my spine and partially separating my shoulder, leaving me with permanent impairments that I still live with daily.

The team MD gave me pain pills and muscle relaxors that didn’t help, so he then recommended possible back surgery. Thankfully, a teammate took me to his chiropractor in Oakland who also cared for members of the Oakland Raiders. After a few chiropractic spinal adjustments, I was back at practice where the team MD approached me and said, “Well, Jim, I see those pills worked.”

“No, they made me dizzy and constipated. I was still in pain, so I saw a chiropractor instead.” His usual friendly demeanor suddenly changed.

“But chiropractors are quacks and that crap doesn’t work,” he told me in no uncertain terms.

Not being familiar with the medical bigotry against chiropractors at that time, I naively responded, “But I’m back playing, doesn’t that count for something?”

A few years later after my graduate school/ teaching/coaching stint at Rutgers University, my chiropractor urged me to change careers and enter chiropractic college. Little did I know I was enlisting into the most profound war ever fought by the medical society, including its war on cancer and heart disease.

Certainly there is no denying the chiropractic profession has suffered the worst defamation campaign ever perpetrated by one rival profession upon another to create a contrived image that chiropractors still suffer with in the eyes of many people.

Even Judge Susan Getzendanner mentioned this quandary in her opinion in the historic Wilk v. AMA antitrust trial when four chiropractors sued the AMA et al.:

“The [illegal] activities of the AMA undoubtedly have injured the reputation of chiropractors generally…In my judgment, this injury continues to the present time and likely continues to adversely affect the plaintiffs [chiropractors].  The AMA has never made any attempt to publicly repair the damage the boycott did to chiropractors’ reputations.”[1]

For 35 years now, I’ve been subjected to this medical witch hunt. Having never been the object of discrimination as a WASP high-achieving male (after all, I am a Cal grad and was All-American in track in 1968), this bigotry bristles my spine, to say the least, and motivated me to write my book on this medical war against chiropractors.

Indeed, after 35 years, I’ve come to a few noteworthy conclusions. As I read Mr. Martin’s article in the alumni magazine, I felt compelled to interject my experience of the largest remaining epithet in our country foisted by the most chauvinistic, politically powerful, and wealthiest of all segments in our nation—the medical society.

While it is politically-incorrect for people to refer to African-Americans with the taboo n–word as Mr. Martin suggested, many MDs have no qualms about using the q-word in reference to chiropractors. I’ve heard it hundreds of times, yet there has never been any media outrage at this degrading and unjustified epithet.

Like racism in the South, the present brand of medical bigotry is nothing less than professional bullying that includes segregating chiropractors from hospitals and the mainstream medical referral system. Moreover, medical “hate speech” remains the last bastion of acceptable bigotry that goes unchallenged and ignored in today’s media as well as among people who fancy themselves as social progressives. For example, does Cal even have a chiropractic program?

Indeed, when was the last time you’ve read an in-depth article about the epidemic of back pain and the benefits of chiropractic care, now the third-largest physician-level profession in the nation that deals specifically with spine-related disorders?

If you’re like most people, probably never, and for good reasons.

The Origin of Medical Bigotry

Unlike the diffused origins of racism, sexism, or anti-Semitism, medical bigotry can be traced to one man, Morris Fishbein, MD, the executive director of the AMA from 1924 to 1949. Fishbein, dubbed the Medical Mussolini, made no bones about his bullying when he wrote, “Scientific medicine absorbs from them that which is good, if there is any good, and then they die.”[2]

According to Harper’s Magazine, Fishbein set the tone when he transformed the AMA from a “panty waist” organization that promoted education and research into “the most terrifying trade association on earth.”[3]

Unknown to most people, inexplicably Fishbein financed his war chest by jumping into bed with the tobacco industry in 1930 until 1986. Many Old Blues are old enough to remember when MDs were featured in cigarette ads on TV, and this windfall enabled the AMA to carry on its destructive propaganda campaign with the aid of a compliant media also profiting from tobacco sponsors.[4]

Under Fishbein’s tyrannical leadership, during the first half of the 20th century, over 12,000 American chiropractors were prosecuted over 15,000 times, and some 3,300 were sent to jail for practicing medicine without a license.[5] Their real crime was, in fact, competing for patients since chiropractors never used drugs or surgery.

When the AMA’s illegal Committee on Quackery announced in 1962 its goal to “contain and eliminate chiropractic,” it almost eliminated what now has been deemed the most effective non-drug, non-surgical treatments for the majority of back problems.

What is the net result of this medical boycott today in America? Most notably, back pain has become the #1 disabling condition in the world with total costs approaching $300 billion. Research estimates 90% of Americans will suffer from an acute back attack in their lifetime; 20% consider their back pain to be serious, crippling, or disabling.[6]

Ironically, while medical bullies defamed chiropractors, medical spine care has drawn criticism from leading research journalists. Many experts now agree that the epidemic of back pain is a direct result of medical mismanagement of spine problems—misdiagnosis, mistreatment, and misinformation.

Spinal medicine in the US has been called the “poster child for inefficient spine care” and has become a “national scandal” with the growing evidence of opioid drug addiction, ineffective epidural steroid injections, and spine surgeons “gone wild” doing hundreds of thousands of unnecessary fusions based on the debunked disc concept.[7]

The seminal MRI research in 1990 found “bad discs” in pain-free people; spine researchers now chide disc abnormalities as “incidentalomas.”[8],[9] Researchers at Dartmouth suggest nearly 40% of back surgeries are unnecessary, which explains the high rate of failed back surgeries.[10]

The official paradigm shift in spine care toward chiropractic care began in 1994 after a coalition of spine experts comprising the Agency of Health Care Policy and Research, under the guise of the US Public Health Service, listed spinal manipulation a “proven treatment” for acute low back pain in adults.[11]

This agency also found only one in 100 back surgeries to be helpful; physio-therapeutics such as ultrasound, TENS, hot packs, and other standard treatments by physical therapists were also short term at best and considered ineffective to change the underlying causes.

Spine experts now agree most back pain is “mechanical” in nature due to joint dysfunction and, considering the spine has over 300 joints, this explains why manipulation works well by restoring proper joint play.[12]

This new found science underscores why chiropractors survived the massive and unjust genocidal war by the AMA—because it works so well by addressing the primordial problem with most back pain—joint dysfunction. Simply put, you don’t slip discs, but you do slip joints.

The proof is positive and research studies cannot be clearer that chiropractic stands at the top of spinal treatments as Anthony Rosner, PhD, testified before The Institute of Medicine: “Today, we can argue that chiropractic care, at least for back pain, appears to have vaulted from last to first place as a treatment option.”[13]

Indeed, the medical bigots and the media cohorts owe both the public and chiropractors an apology. Freedom of choice for patients, the right to informed consent in treatment options, and professional cooperation should be the hallmarks of health care instead of medical bullying and segregation.

JC Smith, MA, DC, is a 33-year practicing chiropractor, author of The Medical War Against Chiropractors, and he maintains a website, Chiropractors for Fair Journalism. 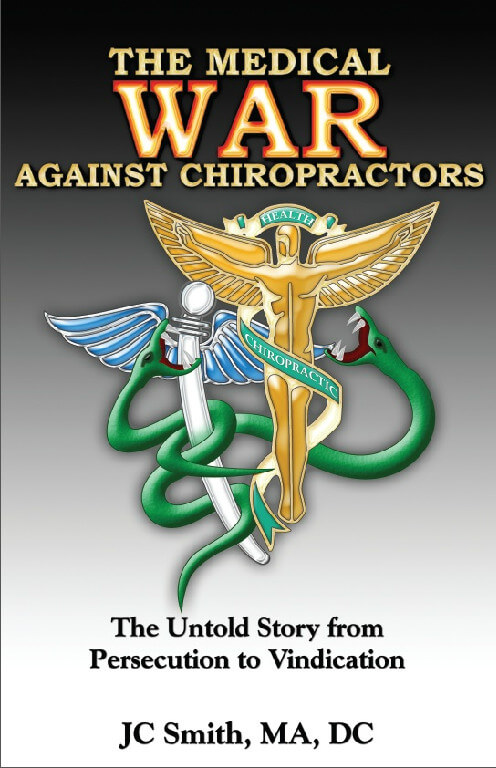 [13] Testimony before The Institute of Medicine: Committee on Use of CAM by the American Public on Feb. 27, 2003.