Let me explain why I feel like the late great Brooklyn Dodger, Jackie Robinson.

Avid baseball fans may recall he was 1947 Rookie of the Year, MVP in 1949, All-Star from 1949-1954, and 1962 Hall of Fame inductee, but he was better known as the first African-American who heralded the end of racial segregation in major league baseball that had relegated black players to the Negro leagues since the 1880s.

Although he was great at every level of baseball from high school to UCLA where he was the only athlete to ever letter in four sports, people questioned whether he could cut it on the major league level due to racism.

Finally when given a chance, Jackie proved them wrong although he was still subjected to the wrath of racist fans and players alike.

His story is one of courage as much as athletic prowess. A 2013 movie, 42, recounts his tribulations and career.

As a chiropractor myself, I feel the prejudice from most MDs despite the fact that chiropractic care has proven itself to be more effective than medical spine care for the majority of cases as the latest JAMA research affirms and ACP guidelines suggest to use conservative care before medical spine care (drugs, shots, surgery) except for the “red flag” conditions.

Despite the 1994 AHCPR guideline #14 on acute low back pain in adults that listed spinal manipulation (SMT) as a “proven treatment,” and the American College of Physicians 2007 guideline and now its updated 2017 version that again lists SMT as a front-line treatment preferable over OTC drugs, prescriptions painkillers, epidural steroid injections, and surgery, chiropractors still get little mention in the media and few referrals from MDs.

To quote from the French, Plus ça change, plus c’est la même chose, which translates, “The more things change the more things stay the same.”

In fact, the medical boycott of chiropractors is still in effect just as Jackie continued to live with racism despite the accolades he garnered throughout his career.

Mark Schoene, editor of The BACKLetter, asked in his article, “Have Guidelines Been Successful in Improving Back Care? What are the Barriers to More Enlightened Care?”

So let me take a stab at answering his questions. To answer his first question, no. The answer to his second question is the basis of my books—the history of chirophobia, the medical prejudice against chiropractors.

Again, I liken chirophobia to racism with one big element missing to help the public understand our plight—the “backstory”—the history or background—in the medical war against chiropractors. For example, in Gone with the Wind, the main characters, Rhett Butler and Scarlett O’Hara, played out their love affair among the backstory of the Civil War.

With that in mind, the backstory of racism includes the well known issues of slavery, Civil War, Jim Crow laws, Civil Rights Act, and MLK, Jr. Of course, we all are well aware of that backstory that continues to this day evident by #BlackLivesMatter movement.

However, when I mention chirophobia, people are clueless about our backstory consisting of the Flexner Report, Morris Fishbein, aka, the Medical Mussolini, nor do they know about H. Doyl Taylor, the Committee on Quackery, columnist Ann Landers, medical propagandist Stephen Barrett, the Wilk v. AMA antitrust trial, George McAndrews, or any of the players and events that have shaped our profession.

Indeed, we remain the Mystery Science profession to most in the public because they just don’t know the essence of what we do nor do they understand the character defamation against our profession. They simply don’t understand why they think they way they do about our profession.

The backstory of chiropractic is not just as a nondrug, nonsurgical treatment for spine-related problems, but the background is the medical bigotry and boycott that permeates our society and is undoubtedly the biggest clog in our funnel of new patients who get siphoned off to the medical railroad.

So, my answer to Mr. Schoene’s question is really a cultural transformational problem with no easy answer. Just as the integration of Jackie Robinson was a huge first step in the right direction, it wasn’t the last step.

I hope the ACP and JAMA guidelines will be the same transformation for DCs and CAM providers. But there are many more steps and challenges to overcome for both racial equality and medical freedom.

Mr. Schoene also asked in his article, “How will MDs motivate their patients to seek alternative care?” Isn’t this how Branch Rickey felt, too, to integrate Jackie into his Dodgers as well as all of MLB?

After nearly a century of chirophobia (anti-chiropractic propaganda) in the medical war against chiropractors, it will be difficult for the average party-line MD who subscribes to this bias against all-things-chiropractic as they were taught by Morris Fishbein outlined in the 1930s and the Committee on Quackery following in the 1960-70s. Indeed, this chirophobia is well bred into most MDs, students, and medical schools to this day.

For example, after the ACP and JAMA guidelines were released recently, I sent out two letters to every MD in my county without one response or referral despite being the best qualified DC in town with 35 years of experience operating a well-equipped facility with decompression tables and a staff of four massage therapists.

Just as Jackie met resistance despite his personal success, I doubt most MDs will gladly send MSD patients to DCs despite our proven track record. It just goes against their medical DNA.

So, as Mr. Schoene asks, how will MDs motivate their patients to seek DCs after years of ridiculing us? Imagine a white supremacist suddenly embracing African-Americans after years of membership in the KKK—it just ain’t gonna happen.

He wrote that “Physicians have an ethical responsibility to explain to patients the benefits and risks of various treatment options.” But the legal informed consent has never led many patients into chiropractic offices for the most part.

For the typical chirophobic MD, after years of bashing chiropractors he or she would lose face to admit to their patients they were wrong about DCs and other CAM providers. I doubt they are willing to do so no matter what the guidelines suggest as I wrote in my article, “So What!” Just as most MDs don’t follow guidelines, they won’t admit they are also inept in the diagnosis and treatment of MSDs, and have too many perverse motivations to send these patients to DCs—pride, prejudices and profit.

It may take an epiphany of some type to break the ice on the continuing boycott of chiropractic care by mainstream MDs and medical reporters.

It may take a few lawsuits by disgruntled patients who were railroaded on Dr. Toad’s Wild Ride to drugs, shots, and surgery to no avail, only later to take a detour into a chiropractor’s office to get adjusted and relieved of their chronic pain. We now see this with TV ads by attorneys phishing for clients about medical procedures/drugs gone wrong.

Or it would be helpful if the medical media were to jump on the chiropractic bandwagon as Dr. Marc Siegel at FOX News did after the ACP guideline was released, but it will take more than one segment to create a paradigm shift among MDs and patients.

Even when Dr. Oz, who is friendly to DCs, tried to help explain the Katie May accident, the segment “gotcha” title, “Breaking News: Can Your Chiropractor Kill You?,” ostensibly did more harm than good. 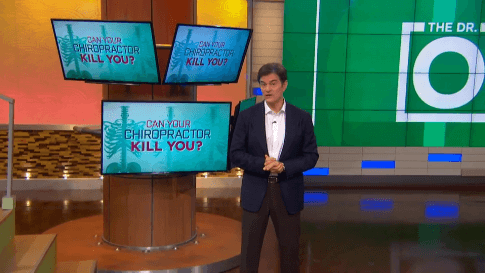 Until we break into the earned media on a constant basis, we will remain on the margins. Imagine if Jackie Robinson had not been a great player, other African-Americans might never have had the opportunity to play today. As a minority, every one of us is that player whose success or failure will reflect on our entire profession, so it’s best to be well prepared as a spokesman/woman in order to articulate the issues we face.

Just as Jackie Robinson and other rookies spent time in the minor leagues before entering the big leagues, we need a stable of qualified PR players who graduated from a PR Boot Camp to enter the big league of communications skilled in verse and speaking talents. We need new and young DCs knowledgeable in the history, politics, and sociology of chiropractic in order to present our case to a skeptical public and press.

Every state association and chiro college needs to develop a PR program to educate students and doctors willing to become spokesmen in our profession. We can’t expect to win in the court of public opinion if we don’t have qualified players.