Elephant in Healthcare Reform
This appeared as an Op-Ed in the Macon Telegraph on June 28, 2017

Once again Congress feverishly tries to fix a broken healthcare system while ignoring the proverbial “elephant in the room” that continues to dominate but goes unmentioned.

Republican Senator Rand Paul preaches the need to have free enterprise in this healthcare equation, but he fails to mention the biggest obstacle to any reform is the medical monopoly that likes the present system dominating nearly 20% of the economy while charging extravagant costs leading to the primary cause of bankruptcy for Americans—medical bills.

If Americans had the best health in the world, it might be worthwhile, but the fact is our for-profit system ranks at the bottom of the industrial nations while spending the most: for example, the US spends per capita $8508 while Australia spends $3800.

Not only expensive, the British Medical Journal revealed the overall danger of American medical care in an editorial, “Medical error—the third leading cause of death in the U.S.”[i]

The fact is Americans take more drugs than any society in the history of the world, yet the U.S. has the worst ranking of any advanced nation in every category of chronic degenerative disease according to the Commonwealth Fund Scorecard, “Mirror, Mirror on the Wall, 2014 Update: How the U.S. Health Care System Compares Internationally.”[ii]

According to the Scorecard, the U.S. ranks last of 11 nations overall while being the most expensive. Among the 11 nations studied in this report — Australia, Canada, France, Germany, the Netherlands, New Zealand, Norway, Sweden, Switzerland, the United Kingdom, and the United States — the U.S. ranks last or near last on dimensions of access, efficiency and equity. The United Kingdom ranks first, followed closely by Switzerland.[iii] 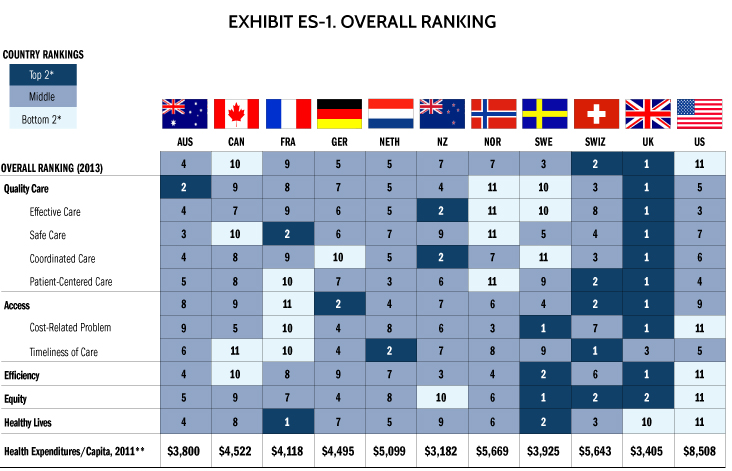 If Sen. Paul wants free enterprise to lower costs and improve outcomes, the Senate bill needs to break up the medical monopoly. Unfortunately, “The pen may be mightier than the sword, but it is not mightier than the dollar,” according to NM Hadler, MD, author/professor at UNC.[iv]

Little do people know the medical-industrial complex spends four times as much on lobbying as the No. 2 Beltway spender, the much-feared military-industrial complex, which explains why Harper’s Magazine once called the AMA “the most terrifying trade association on earth.”[v]

HHS Sec. Tom Price also knows not to bite the hands that feed him. Health professionals contributed $474,070 in 2016 to his Campaign Committee and Leadership PAC combined; Pharmaceuticals/Health Products contributed another $166,400. He is also being investigated for allegedly trading stocks of health-related companies while working on legislation affecting the firms.[vii]

Obviously this Price is not right.

The medical monopoly is well-entrenched in Washington and will never allow free enterprise to lower costs in healthcare. Until American moves to a single-payer system like the rest of the nations, we’ll continue to see high costs and poor outcomes.

So, what to do? Drain the elephants out of the swamp!

[iv] Hadler, NM, Stabbed in the Back; confronting back pain in an overtreated society, University of North Carolina Press, 2009, pp. 88