Recently CNN.com published an op-ed piece entitled, “The Back Pain Most Surgeons Won’t Find” by Dr. Nick Shamie, President of the American College of Spine Surgery.

Apparently, his article has gone viral among spine surgeons looking for new prey, err, I mean patients as evident by a newspaper ad I found in the Macon Telegraph this last weekend.

Undoubtedly, this neurosurgeon’s sales pitch at his so-called “free seminar” will be just as Dr. Shamie suggested—putting titanium screws in the SI joint. 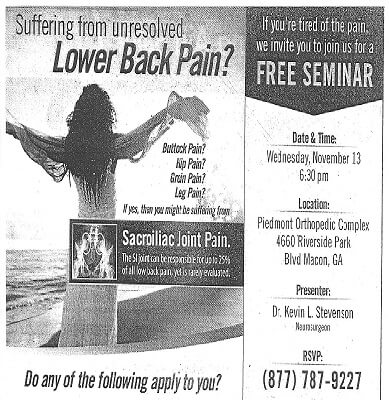 In this adv, under the box “Sacroiliac Joint Pain”, you can read the fine print that says, “The SI joint can be responsible for up to 25% of all low back pain, yet is rarely evaluated.”

The advertiser in this case, Dr. Kevin L. Stevenson, should have added, “yet is rarely evaluated by MDs,” as Dr. Shamie mentioned in his CNN.com article. In fact, chiropractors have evaluated the SIJ for pain for over a hundred years.

Another omission in this advertisement was the original research study from which this stat was lifted: “The SI joint can be responsible for up to 25% of all low back pain.” It seems he has selectively omitted the bad news from this study about SIJ fusion.

Dr. Cohen points to the lack of evidence for SIJ fusion:

As I mentioned in my recent article, Hammer & Nails, some of Dr. Shamie’s opinions were also very misleading. In fact, a study in Pain Physician documented a 331% rise in sacroiliac injections, according to a recent article in The BACKLetter that also mentioned the “resurgence in the use of sacroiliac fusions…despite a lack of evidence of its effectiveness or efficacy.”[1]

Dr. Cohen admits in his Abstract:

Sacroiliac (SI) joint pain is a challenging condition affecting 15% to 25% of patients with axial low back pain, for which there is no standard long-term treatment [what about SMT and spine exercises that have controlled my own and thousands of my patients with SIJ pain? It’s shocking how these so-called medical experts continue to ignore chiropractic care.]. Recent studies have demonstrated that historical and physical examination findings and radiological imaging are insufficient to diagnose SI joint pain [Maybe MDs misdiagnose SIJ pain, but we DCs have exams to detect SIJ pain. Just because most MDs are inept with spine issues doesn’t mean all spine care providers are incompetent.]. The most commonly used method to diagnose the SI joint as a pain generator is with small-volume local anesthetic blocks, although the validity of this practice remains unproven. [Yet that doesn’t stop MDs. BTW: the “most commonly used method” by DCs is to palpate, do standard orthopedic tests, and administer an adjustment in the appropriate way.]

Now we see a local neurosurgeon passing on the same misinformation—a term in journalism called “citation laundering”— that is, the referencing of erroneous facts that are repeatedly passed on as “perceived wisdom” by other newscasters or, in this case, other neurosurgeons.

I wouldn’t be surprised if this newspaper ad goes viral among other neurosurgeons in other parts of our country to drum up more business for spine surgeons.

Have you also noticed another marketing ploy used by spine surgeons touting a “minimally invasive” procedure? This is clearly an oxymoron such as “slightly pregnant.” Doing an incision and placing titanium screws into someone’s SIJ is not “minimal” compared to chiropractic adjustments.

Okay, now it sounds like an Abbott and Costello comedy act similar to Who’s on First?, but this time these comedians are not talking about baseball, but playing two spine surgeons looking at an MRI:

“Hey Abbott, is this disc a false positive or a true positive?”

“Well, it’s positively there, but it may not be what it appears to be, so that would make it a false positive.”

“So, a false positive is actually a negative.”

“I dunno, Lou, but how can a positive be negative?”

“But if it’s a true negative, does that mean I can’t do the fusion?”

“Certainly not, just go ahead and put in the screws because the patient will never know the difference.”

Of course, the most shocking punch line will come when surgeons like Dr. Shamie or Dr. Stevenson recommend seeing a chiropractor before any surgery as the guidelines now endorse and as the informed consent laws require.

Certainly if there is gross instability from fracture, injury, or cancer, I can understand the need for such drastic surgery. But in most SIJ cases, that is not the case; it is simply old misalignments that have never been adjusted and now have buckled after years of prolonged sitting, twisting or bending.

Whether “true positives” or “false positives,” it does appear these surgeons are very confused about both the diagnosis and treatment of SIJ dysfunction. This confusion stems from the medical emphasis on patho-anatomical problems rather than patho-physiological issues like joint alignment and movement that cannot be seen on an image.

Indeed, their quandary appears to be more like “fool’s gold” and totally unreliable since the real “gold standard” for both the diagnosis and treatment of SIJ dysfunction is the ability to detect misalignment and loss of joint play via palpation, conducting a few ortho leg tests, then correcting it via SMT (spinal manipulative therapy) and stabilizing it via spinal exercises.

However, switching fusion from the lumbar discs to the SI joints is not the answer in the vast majority of LBP and SIJ patients, but it just may be the newest joke these spine surgeons now tell unsuspecting patients.