Although it’s been nearly 20 years ago, I’ve never forgotten the impact of Edgar Fields at the 1999 Governor’s Advisory Council on Workers’ Compensation conference called by former Gov. Roy Barnes to “lower costs and improve outcomes”  for worker comp injuries.

The Advisory Council on Workers’ Compensation exists to provide information, research, and recommendations concerning workers’ compensation issues. This conference definitely did not provide such good information, it did serendipitously provided me with much more about the real problems facing the governor’s goal.

My opportune meeting with Mr. Fields at this conference held at the beautiful Jekyll Island Club Resort was indicative of the problems facing injured workers in Georgia. 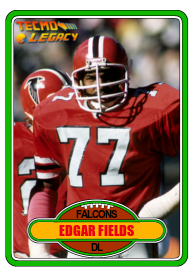 I attended this conference at the request of the regular Georgia Chiropractic Association representative, Mark Cotney, who was unable to attend so he asked me to substitute for him. I had written my first book, How to Avoid Back Surgery, so I was keenly aware of the growing paradigm shift in spine care away from opioid drugs, epidural steroid shots and surgery for low back pain (LBP). I also did my homework about the status of the state’s workers comp costs since low back pain (LBP) is the leading WC injury.

Little did I know what to expect, but it quickly became an eye-opening experience to discover the insidious corruption, obstructions, and lack of transparency in the WC industry in Georgia. Anyone with a stake in this WC game was there to protect their turf in the lucrative WC market. Indeed, lowering costs was definitely not the shared goal of this group.

The first day of the conference scheduled numerous outbreak groups consisting solely of each special interest, such as doctors, lawyers, insurance, hospitalists, or labor, to name but a few of those stakeholders involved with WC injuries.

I attended the physician group the first morning. The first thing they did was vote to give themselves raises, and then they wanted to adjourn to play golf or tennis. I interrupted to ask if they were going to address Gov. Barnes’ stated goal to “lower costs and improve outcomes.” The other attendees begrudgingly sat down to hear me out, more anxious to play than to learn what I might have to say.

Since I had just published my book, I presented the most recent spine research and evidence-based guidelines on LBP, namely the  1993 Manga Report from Canada and the 1994 American AHCPR guideline #14 on acute low back pain in adults. Both of these comprehensive studies recommended spinal manipulative therapy (SMT) before drugs, shots, and surgery.

In fact, the Agency for Health Care Policy and Research (AHCPR), a division of the US Public Health Service, listed SMT as a “Proven Treatment” along with NSAIDs and ice/heat. This analysis was the most definitive study ever done on LBP, constituting a two-year period reviewing over 4,000 articles from the National Library of Congress.

The 23-member expert panel, headed by an orthopedic surgeon, Stanley Bigos, also stated that “Surgery has been found to be helpful in only one in 100 cases of low back problems,” and that common physical therapy modalities “may give relief for a short time, none have been found to speed recovery or keep acute back problems from returning. They may also be expensive.”

Unfortunately, the Georgia State Workers’ Compensation Board apparently chose to ignore this federal guideline on LBP. As I learned at the physicians meeting, the board has no policy nor follows any guideline whatsoever; consequently, expensive and ineffective medical treatments run rampant in the WC program, adding to this huge $40+ million cost for back injuries annually.

Surprisingly, none of the other members of the medical committee headed by an orthopedic surgeon, Kay Kirkpatrick, had heard of these studies and frankly didn’t seem very interested in learning more how chiropractors could help lower costs and improve outcomes. However, I did find one kindred soul, Dr. Richard Tyler, orthopedist and former member of the WC Board in Georgia, who admitted to me that “50 to 90% of all back surgeries are unnecessary” and stakeholders were “living high off the backs of injured workers.”

The next day was even more revealing at the Plenary Session when everyone assembled together. Usually there is a Keynote Speaker to enlighten the attendees about relevant issues, but at this conference, they had not scheduled anyone. Again, it seemed they were there primarily to play and enjoy the beautiful resort, not working to improve the WC program.

Without a keynote speaker, the Plenary Session floor was thrown open to anyone who wanted 5 minutes to address the entire 400+ audience. After listening to a couple of boring vendors making sales pitches for their products, I had my turn to speak about the new guidelines on LBP, which I thought would be useful to attain the goals of the conference since LBP is the leading WC injury and expense.

My five minute talk turned into ten minutes when suddenly Dr. Kirkpatrick sitting in the front row interrupted my talk by standing up and shouting to the audience, “We don’t want those chiropractors who think they can cure diabetes.”

Honestly, I have never heard any DC make this claim, but I do know this is a chirophobic lie MDs tell themselves to defame chiropractors. She might as well have shouted, “We don’t want chiropractors causing strokes or paralysis,” other bogus claims used by orthopedists to scare patients.

The audience was stunned by her sudden outburst, so I replied, “Ma’am, diabetes is not a workers comp injury,” then continued with my talk about the new guidelines. I was actually thinking to myself, “Sit down and shut up!”

I continued my review of the ‘best practices’ guidelines mentioning the lack of support for opioids, epidural shots, and back surgeries. You could hear a pin drop in the room by then; apparently I had crossed the line by letting the cat out of the WC bag when I mentioned, “Surgery has been found to be helpful in only one in 100 cases of low back problems according to the AHCPR guideline.”

A hush feel over the audience and suddenly an impatient naysayer called out, “okay, that’s enough.”  Again, they didn’t want to hear about the ‘best practices’ to treat the LBP problem; most had one foot out the door ready to play golf. They also didn’t want to discuss the extravagances of the WC cash cow—back surgeries.

Then the most fortuitous event occurred that change everything when the largest African American attendee, Edgar Fields, standing in the back of the room raised his hand interrupting the naysayers when he asked me, “May I say something?”

Since he was a domineering figure, I replied, “Yes, sir, you can say whatever you want.”

Then he explained, “When I played football for the Detroit Lions and Atlanta Falcons, it was chiropractors who kept us going.” Wagging his finger at the curmudgeons, he warned, “I suggest the rest of you shut up and let him tell us how he can help.” 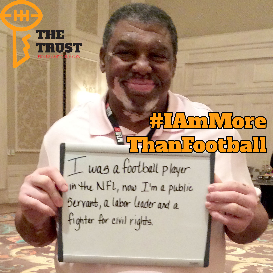 As I later learned, Edgar Fields was a labor rep attending this conference. In his earlier life, he had played defensive tackle in college for Texas A&M, was drafted in the 3rd round (63rd overall), and then played five seasons for the Atlanta Falcons and the Detroit Lions. As I said, he was a foreboding figure among the attendees at this conference.

His testimony and intimidating figure broke the ice and other attendees suddenly spoke up with similar sentiments: “I want to send patients to chiropractors, but the MD won’t refer, the lawyers won’t allow, or the claims adjustors say it’s not covered.” These are the same obstacles injured workers still face today.

Many other attendees reiterated the same problems—the hurdles injured patients encountered when they sought chiropractic care. After 45 minutes, this fascinating soul-bearing session ended and then everyone went out to play.

Here’s a recent picture of Edgar Fields as a labor rep, social activist, and a fighter for civil rights:

Before I left the lecture room, a friendly attorney came up to me and said, “Son, let me explain to you the facts of life about Workers Comp in Georgia.” I smiled at his comment, knowing this was a lesson I needed to learn.

“The real reason the WC guys don’t like you guys is because chiropractic is too cheap.”

I naively thought the cheapest mousetrap would be preferred to lower the high costs of healthcare, but I learned why I was wrong when he taught me of the ‘perverse’ incentive in WC.

He went on to explain, “You need to talk to the self-insured people who want the cheapest mousetrap. This conference has the ‘for-profit’ guys and the way it works is the more the WC insurance people pay out for surgery, hospitalization, etc, the more they can charge in premiums, so there’s more for them to invest and that’s where they make their profit.”

It was my first “ah-ha” moment about workers comp in Georgia. It was equivalent to learning there’s really no Tooth Fairy or Santa Claus. Indeed, there is no free enterprise in Georgia’s WC program.

He concluded his lesson on the facts of life: “So there’s more money for everyone — the insurance executives, physicians, hospitals, pharmacists, etc.”

Of course, the losing players in this WC game are the patients railroaded into drugs, shots, and surgery, the business owners who pay for this expensive WC insurance, and the chiropractors who are marginalized to the proverbial bench to watch rather than to compete on a level playing field to lower costs and improve outcomes.

I learned the bottom line being the cheapest, most effective mousetrap is a negative in the WC system. This is the perverse incentive where money dominates the system, certainly not “best practices” or guidelines. The governor’s goal to lower costs was doomed from the beginning.

After the conference and my facts of life lesson, I did more research into this WC issue and issued a report to the governor: A Chiropractic Proposal for the Governor’s Advisory Council on Workers’ Compensation.

I never heard back from anyone. In fact, as I learned afterwards, nothing came out of this conference, but everyone had a good time playing at the beautiful Jekyll Island Club Resort!

I also spoke about this issue with my then Georgia State Senator, Sonny Perdue, whose wife, Mary, was a patient of mine at the time. Initially he appeared upset that the SBWC didn’t use the cheapest mousetrap and told me, “When I’m governor, things will change.” And they did, for the worse.

As I learned, the WC system is rigged, the cheapest mousetrap is frowned upon, the medical monopoly has more lobbying power than chiropractors, and political medicine has more influence than research-based “best practices” guidelines.