What Would Forrest Do?

In Defense of Classic Chiropractic

As you know, chiropractic has been attacked by the medical trolls in the media as we witnessed again with the recent AHA article that SMT may cause strokes when, in fact, the evidence is scant, the likelihood remote, and the problems are miniscule compared to medical iatrogenic issues.

Now we hear controversial comments from non-traditional chiropractors that need to be addressed.

The recent flap over the Wisconsin Chiropractic Association’s proposal to include prescription rights has rekindled the debate over our scope as we previously had seen in New Mexico. If we are going to the mattresses, I daresay there are more important battles to fight than prescription rights considering OTC and painkillers have all been shown to be virtually placebo with no curative effects whatsoever, just an arm’s length of negative side-effects.

Now we have another imbroglio brewing with a generation of DCs who seemly have a low appreciation of classic ‘hands-on’ chiropractic care.

This bodes of a frightening trend to consider—the day a chiropractor skilled in classic manual manipulation will be difficult to find because of the growing number of practitioners who think their instrumentation is equivalent or superior.

We all know of some proponents of instrument-mechanical adjusting devices or non-force methods who tell patients the traditional chiropractic adjustment is “old fashion” and “unscientific,” implying, of course, that “their” brand of chiropractic care is superior.

Some of these device adjustors also partake in baiting the patients by using the fear factor just as we’ve seen when some unethical MDs tell patients, “Whatever you do, don’t come crawling back to me when the chiropractor paralyzes you.” I’m not joking!

It’s bad enough when MDs lie to patients, but now we have our own DC’s dealing the same fear factor card when they advertise themselves as “gentle” chiropractic care. Of course, their implication suggests that classic chiro care is not gentle, not modern, and unscientific.

As a practitioner who uses a blend of ‘force’ as well as ‘non-force’ methods, I understand the need to vary adjusting methods as per needed on an individual basis. Obviously a geriatric or pediatric case calls for a different approach than the 220-pound fullback who comes to my office.

And I realize some patients are scared of hearing their “bones crack,” as they say, because the medical media plays up the remote stroke/fracture issues as if we DCs all had a direct line to 911. Never do they mention our low malpractice rates compared to MDs, so the public remains ignorant of the iatrogenic problems of medical spine care.

I realize some old folks with brittle bones may require a very low force method, but for the vast majority of patients, a traditional adjustment is the preferred method to correct vertebral subluxations. After all, that has been the gold standard for our outstanding results over the last 125 years—good ol’ hands-on spinal adjustments.

While there may be patients who prefer one approach over another, that should not be at the expense of defaming each other or at the expense of the naïve patient who doesn’t know what type of chiropractic technique is needed.

Perhaps there is a desire for a “competitive” edge by the new doctor, but as a small profession we should be a “band of brothers” each looking out for the best in each other by collegiality rather than indefensible denigration. And above all, we should be honest with our patients.

The point is not our personal preference, but rather what is best for our patients.

Let me ask: when was the last time you referred a patient to another chiropractor? I’ll bet you’ve referred more patients to the surgeon than to another DC if you’re like most. Indeed, are we adversaries rather than colleagues working in the best interest of each patient?

Do You Have the Knack?

Adjusting is a skill, just like those of a good surgeon, dentist or massage therapist—anyone can mimic the motions but the ‘hands-on’ kinetic feel and clinical expertise separates those highly skilled from his/her colleagues, and so it is in chiropractic.

Like any athletic movement, to render a manual manipulation requires the “knack” of adjusting as DD Palmer once mentioned—a combination of skills including strength, a kinetic sense to find joint dysfunction, and the ‘hands-on’ touch to take the joint past the para-physiologic range, all issues a device cannot achieve.

This is the knack that not all DCs, DOs, PTs, or physiatrists have, which is not so difficult to understand considering adjusting is an “ART” form.

Just as in any sport, for example, a student can study the anatomy and physiology, be shown the techniques, tactics, strategy, and be thoroughly coached, but that does not guarantee the student will become a skilled and successful player.

Not every DC has this knack to adjust and, fortunately for those who don’t have the knack to do manual adjustments, there are other methods to use. I recall the number of official chiro techniques is around 65 (probably more today) and each practitioner uses a blend of many of these. Throw into this mix is the variance of skill level among practitioners of this fine art and the overall effectiveness of their clinical techniques.

Forrest Gump, Chiropractor
Considering these variables, it’s easy for DCs to understand that not all DCs are alike, but the problem remains that the public is unaware of these differences. Indeed, as Forrest Gump might say, “chiropractors are like a box of chocolates, you just never know what you’ll get.” Certainly patients don’t realize what they might get in terms of the effectiveness of various techniques.

While device-adjustments may be a lot easier and quicker to render, however, two studies have shown it is not as effective as classic ‘hands-on’ chiro care. It appears there is insufficient evidence to support the notion that these non-traditional adjusting methods work as well as SMT for the majority of cases.
Gatterman Study

Let’s look at two comparative studies focusing on technique methods. If there are other studies I should know, please send them to me.

In the rating scale of 1-10, the effectiveness of procedure ratings for acute low back pain for 10 procedures were quite revealing. Ranking them in descending order for low back pain found the following:

Conclusions:
The ratings for the effectiveness of chiropractic technique procedures for the treatment of common low back conditions are not equal. Those procedures rated highest are supported by the highest quality of literature. Much more evidence is necessary for chiropractors to understand which procedures maximally benefit patients for which conditions.

If you were a patient with severe LBP, would you want an Activator guy to activate you, an UpC practitioner to toggle your Atlas, or would you prefer a LBP guy who does HVLA side-posture with a distraction table?

Okay, I can already hear these non-traditionalist guys saying, “The lack of evidence in the literature is not evidence of lack of effectiveness.” Maybe so, but it may be a clue nonetheless, like reading the Daily Racing Form, the past performances do have a bearing on which horse to wager.

For example, outside the chiropractic domain to be more objective, if you were a patient with a heart problem, would you go to a cardiologist who used a method that rated 3.7 or 9.5 in terms of effectiveness? And as an insurance payer, would you prefer paying for a method rating 9.5 or 3.7?

Indeed, in this era of “best practices” and evidence-based methods, perhaps we should adapt our methods to the patient’s need rather than adapting every patient to our technique!

The graphs for Oswestry and Pain were revealing: 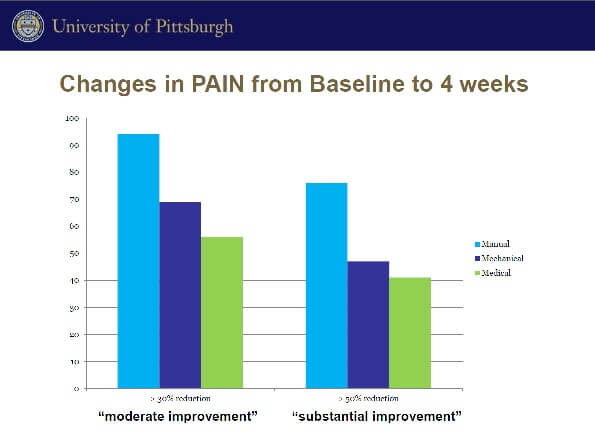 As you can see, classic ‘hands-on’ chiro care out-performed both Activator and standard medical care in terms of Changes in Pain and OSW results. Dr. Schneider concluded that “manual manipulation provides significantly more reduction in disability and pain at 4 weeks as compared to mechanical manipulation or medical care.”

In fact, medical spine treatments—narcotic painkillers, epidural steroid injections, and spine fusions—are now considered placebo for the most part. Considering medical care OTC meds are placebo, it can be said that Activator was only slightly better than placebo.

I doubt this research alone will dissuade DCs from using instrument adjusting just as research studies will not dissuade pain management MDs from prescribing narcotic painkillers or epidural shots that are now considered dangerous and placebo, but this study broaches ethical issues as well as technique issues.

First of all, this study raises one issue: whether or not Activator should be marketed as ‘chiropractic care’? Considering the public generally regards chiro care as ‘hands-on’ SMT, this may appear as a ‘bait-and-switch’ situation. Indeed, is anything done by a DC enabled it to be called “chiropractic care” to the unsuspecting public?

Secondly, this also raises the ethical question whether the Activators will refer an unresponsive case to a classical chiropractor. I have not found that to be the case; instead, some prideful DCs may think if their brand of mechanical-instrument adjustments doesn’t help, then off to the neurosurgeon the patient is referred. 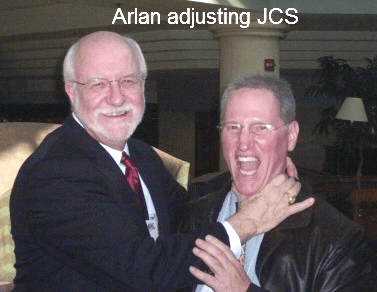 According to the Schneider study, at best Activator is slightly better than NSAIDs; worse, it is rated very low on the scale of effective chiropractic treatments by Gatterman et al; and, at worst, it is a deception to the public to be sold as classic chiropractic care when it is clearly not so.

I daresay these non-traditional chiropractors must be honest with patients who don’t know there is a difference among chiropractic treatments or that mechanical-instrument treatment may be no better than taking a pill as Schneider indicated.

Thirdly, I recommend another feature be added to
the Informed Consent that we now legally must do with each patient. Aside from informing the patient of the treatments, risks, costs, and alternatives, perhaps our state boards should also include a clause that requires non-classical chiropractors to inform new patients that the Activator or whatever non-traditional technique arises in the future is not considered classic chiropractic care upon which the guidelines were originally based.

At least the unsuspecting patient will understand he or she agrees to non-traditional spine care offered by that DC and if that method fails to produce significant results in 2 to 4 weeks as the guidelines state, that the patient will be referred to a traditional chiropractor before being sent to the surgeon, which should be the goal of every DC, that is, to avoid drugs, shots, and surgery.

Since not all chiropractors are alike, we should take Forrest Gump’s advice and try another chiropractor if you don’ like the first one you try, ya folla?