Certainly the bias in the media is a constant concern for complementary and alternative healthcare providers (CAM), whether it is “professional amnesia” as Tony Rosner, PhD, described the forgetfulness of the medical media to acknowledge CAM advances in evidence-based guidelines or the never-ending medical bias against all-things-not-medical as we’ve seen with the latest attack on CAM @ CNN.com.

Dr. Offit presents alternative therapies in a very contemptuous manner evident by his article describing CAM as “worrisomely popular” as well as his snide remarks that “the therapist makes a fortune off your misfortune,” and “the therapist promotes ‘magical thinking’.” [1]

Even the use of the “q-word” in the headline is the medical equivalent to the “n-word.”

I found his comment “worrisomely popular” to be particularly indicative of his medical bias, not unlike the proverbial Jim Crow attitude that bemoans the growing call for equality for women, fairness for minorities in our country or, in this case, equal opportunity for CAM providers in healthcare.

It’s troubling that the medical profession has taken this anti-anything-but-allopathy approach considering America is stuck in the throes of a healthcare crisis that will eventually bankrupt our country. Indeed, one would think the AMA needs all the help it can get to fight the costly ravages of disease and impairment.

Also Dr. Offit’s belief that “the therapist makes a fortune off your misfortune” is very ironic considering MDs have been making a fortune off the misfortune of patients for years, especially those having unnecessary back surgeries without the use of conservative care first as every guideline now recommends.

His belief that CAM promotes “magical thinking” is also peculiar considering many CAM methods are based on ageless concepts of natural healing that are certainly more understandable to the management of degenerative disease or chronic pain than allopathy’s “magical thinking” of the medieval germ theory or the futuristic genetic theory.

Indeed, it takes a lot of “magical thinking” to believe germs cause chronic degenerative disease just as it takes to believe your health destiny is solely a function of your faulty gene pool. Between the world of germs and genes is the realm of CAM treatments that the AMA chooses to ridicule rather than to admit they are now very popular, inexpensive, and effective in many cases.

Nor is the medical profession as scientific as Dr. Offit’s sarcastic remarks insinuate. Indeed, if medicine is so scientific, why are Americans so sick? Upon review, evidence now shows that much of “scientific medicine” is an oxymoron.

New research reported in the British Medical Journal shows Dr. Offit’s stance is, in effect, a red herring argument considering 2,000 of 3,000 common medical treatments have been shown to be “ineffective,  unproven, or not worth the risk.” The Washington Post revealed this startling study an article in 2013: “Surprise! We don’t know if half our medical treatments work.”

This shocking revelation is no surprise in medical spine care treatments as Mark Schoene, editor of an international spine research journal, admitted, “Spinal medicine in the US is a poster child for inefficient spine care.”[2] In fact, Mr. Schoene was being nice because he easily could have said medical spine care (opioid painkillers, epidural steroid injections, and spine surgery) is also expensive, dangerous, disabling, addictive, and sometimes deadly as Dr. Gupta noted in his exposé, Deadly Dose.

As Dr. Offit complains about CAM becoming “worrisomely popular,” he is actually offending millions of Americans who use CAM treatments, including millions of CNN viewers who use chiropractors.

Allowing this medical curmudgeon to vilify CAM providers is a dubious policy for CNN.com senior management considering the popularity of CAM revealed in a landmark study by Dr. David Eisenberg from Harvard’s Osher Institute that found Americans made more visits to CAM providers than MDs.[3]

In spine care, CAM equates to Chiropractic, Acupuncture, and Massage Therapy rather than the ineffective substitutes of conservative medical care typically described as “information, reassurance, pain control, physical therapy, and encouragement to return to normal activity.”[6]

In 2009, a survey response from 14,000+ readers of Consumer Reports magazine rated chiropractors at the top and all hands-on therapies were rated above any other type of medical care. 59 percent of those who tried chiropractic were “completely” or “very” satisfied while massage and physical therapy were close runners-up while medical physician care was at the bottom of the list.[7]

With this rapid trend toward CAM, it is understandable why the medical profession is using the power of the press to cast aspersions at CAM providers as we see with Dr. Offit’s remarks @ CNN.com.

Obviously the media has not been a friend to CAM, which is understandable considering most healthcare program directors at every major network are MDs and their shows are sponsored by Big Pharma touting their latest wonder drugs. The last thing Big Pharma wants is a program about non-drug solutions to anything, particularly back pain.

However, CNN and every network should realize there is a huge market of CAM supporters and prospective users eager to learn more about natural ways to get well and stay well. Certainly sponsorship is an issue but, instead of selling painkillers to the public, Big Pharma and vitamin manufacturers could sell natural products and services.

Imagine if there were a weekly TV show about chiropractic care and CAM in general how enlightened the public would become about natural ways to get well and stay well without drugs, shots, and surgery. This is the tipping point America must strive to attain if we are to reposition Americans to a better way of getting well, naturally. 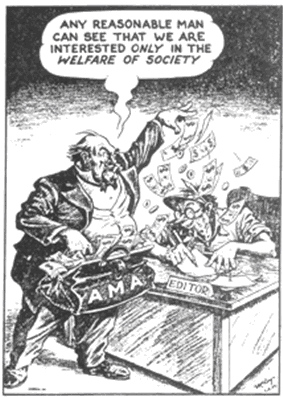