Prescription Addiction: Made in USA

Your recent program proved the present medical model is not winning in the war against opioid painkillers. As Donald Teater, MD, at the National Safety Council once wrote, “Opioids do not kill pain. They kill people.”[1]

Although the CDC statistics of abuse, addiction and deaths mentioned on your program about narcotic painkillers was an important start to educate the general public about the dangers of this opioid epidemic, the enormity of this issue is far worse than reported, such as the frightening fact that 2,500 teenagers every day start using prescription painkillers, leading to a new wave of addicts in the near future.[2]

Obviously there is a desperate need to change tracks how to manage this epidemic of chronic pain without drugs. As Dr. Leanna Wen said on your program, the “pill for every ill” approach has failed. Substituting OxyContin with Methadone is not the answer to this crisis. As Albert Einstein once famously said, “Problems cannot be solved with the same mind set that created them.” Unfortunately, your Town Hall meeting did not offer a non-medical mindset.

As a 35-year health professional who treats chronic pain, I was stunned that your Town Hall discussion did not include any seats at the table for nondrug practitioners, especially chiropractors, acupuncturists, or massage therapists, which is equivalent to discussing race relations without any minorities present.

Most noticeably missing was the fact your panel of experts inexplicably overlooked the main reason why most people seek prescription painkillers – low back pain – as well as they omitted any mention of the most effective nondrug treatment – chiropractic care. These are huge oversights that would have enhanced immensely the value of your Town Hall meeting for your viewers.

My bewilderment is based on two facts:

1) The largest medical reason for prescription opioid painkillers stems from chronic low back pain, the No. 1 disabling condition in the nation affecting approximately 100 million adults in the United States annually.[3]

Research now shows over 70% of opioid usage involve various musculoskeletal disorders, conditions that chiropractors help with nondrug treatments. This point was made clear in a 2009 study, “Trends in De-facto Long-term Opioid Therapy for Chronic Non-Cancer Pain,”[4] that found opioid users mainly suffered from the following:

2)    Chiropractic care today is highly regarded by many studies:

Other scientific studies overlooked by your panelists found MDs are not trained in pain management or musculoskeletal disorders.

Numerous studies confirm most primary care physicians are inept in their educational training on musculoskeletal disorders,[8] more likely to ignore recent guidelines[9] and more likely to suggest spine surgery than surgeons themselves.[10]

Primary care providers are the promiscuous prescribers who are the biggest source of opioid painkillers. According to Stanford researcher, Jonathan Chen, MD, PhD. “Opioid prescriptions are dominated by general practitioners — the family doctors, internists, nurse practitioners and physician assistants that most patients see for common problems — and not by a small cadre of high volume ‘pill mill’ prescribers once thought to be fueling this epidemic.” [11]

Richard Deyo, MD, MPH, author of “Watch Your Back!” summarized physician incompetence in the diagnosis and treatment of back pain treatments:

“Calling a [medical] physician a back pain expert, therefore, is perhaps faint praise — medicine has at best a limited understanding of the condition. In fact, medicine’s reliance on outdated ideas may have actually contributed to the problem.”[12]

Mark Schoene, associate editor of an international spine research journal, also balked at the proposal to use MDs as the portal of entry for chronic pain patients considering they created this opioid epidemic with their promiscuous prescribing:

“Primary care physicians and pain specialists don’t have unimpeachable backgrounds in the management of chronic pain in the U.S. These are the medical professions primarily responsible for the opioid overtreatment crisis. Are the two professions that helped create the worst pain management crisis in history of modern medicine capable of leading the way forward? That remains to be seen.”[13]

“Physicians are not adequately prepared and require greater knowledge and skills to contribute to the cultural transformation in the perception and treatment of people with pain.”[14]

Coincidentally, Dr. Gupta’s colleague at Emory University, Scott Boden, MD, director of the Emory Orthopaedic and Spine Center, also admits,  “Many, if not most, primary care providers have little training in how to manage musculoskeletal disorders.”[15]

Not only are MDs poorly trained in back pain cases, the standard “bad disc” premise for low back pain was initially debunked by Dr. Boden.[16] His seminal MRI research in 1990 found “bad discs” in pain-free people confirmed earlier suspicions that herniated, bulging, or degenerated discs may not be the main cause of back pain, undermining the reason for the hundreds of thousands of disc fusions done annually.[17]

In fact, abnormal discs are now seen by experts as commonplace in the normal aging process like gray hair or wrinkles, consequently dubbed “incidentalomas”[18] by Dr. Deyo, yet MDs continue to mislead unsuspecting patients about the importance of these “bad discs.” In 2014 a Mayo Clinic literature review confirmed Boden’s initial research that disc and other abnormalities are common among asymptomatic adults and do not warrant surgery.[19]

Imagine the millions of unnecessary opioid prescriptions for low back pain patients and the hundreds of thousands of epidural steroid injections and spine fusions done each year that are based on an outdated “bad disc” belief that is well known by the spine researchers but kept secret by the medical profession and press.

Another monumental issue in spine care appeared recently in the Medical Journal of Australia that was also ignored by your panelists: “Perspectives: Surgical management of low back pain.”[20] The authors stated “Spinal surgery for chronic low back pain is controversial, and the disproportionate number of fusions in private hospitals is unexplained.”

A related online article published by the MJA InSight newsletter on April 26, 2016, “Spinal Fusion Surgeries Questioned,”[21] also was painfully clear the urgent need to stop the tsunami of back surgeries:

Dr. Richard Williams, orthopaedic surgeon and spokesperson for the Royal Australasian College of Surgeons, told MJA InSight that a key regulation should be that patients must wait a period of 12 months before a spinal fusion surgery was performed, noting “Most patients will recover after these 12 months” without any surgery by using nondrug treatments such as chiropractic care.

Incidentally, Dr. Gupta has known of Boden’s research for years since they work in the same department at Emory. As well, as chief medical correspondent at CNN, he should be aware of this stunning article from the Medical Journal of Australia, but he failed on both counts to inform his audience.

His oversight illustrates his lack of objectivity as a reporter and his conflict of interest as a neurosurgeon unwilling to tattletale on his own profession in a massive cover-up that has contributed to the billion-dollar medical spine care scandal and this opioid crisis we now see.

Elephant in the CNN Newsroom

Many guidelines now agree the doctors best equipped in training and treatment skills to lead our country out of this opioid drug abyss are doctors of chiropractic, not MDs. Indeed, it would have been a well-deserved gesture by your panel to heed the advice of Anthony Rosner, PhD, who testified before the Institute of Medicine on the epidemic of back pain:

“Today, we can argue that chiropractic care, at least for back pain, appears to have vaulted from last to first place as a treatment option.”[22]

Mr. Cooper, let me ask: with the numerous scientific studies cited above, why did your entire panel fail to broach these important concepts in this war on opioids? Perhaps I can answer that question from a non-MD perspective.

In your Town Hall meeting, you mentioned there were stigmas facing patients suffering with opioid addiction that had to be overcome. I daresay at play here is also the long-standing and unwarranted medical prejudice against chiropractors – a term I’ve dubbed “chirophobia” – that deters MDs from referring these cases to chiropractors.

Mr. Cooper, let me reach out to you as someone who has faced a stigma in your personal life. This medical bias may be the biggest stigma to overcome in this fight against opioid abuse – overcoming the pride, prejudice, and profit of inept MDs who boycott chiropractors to the detriment of pain patients. 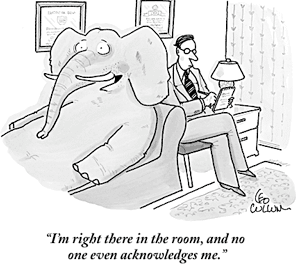 Just as MDs refer dental problems to dentists, they should be required to refer chronic back pain cases to chiropractors as the guidelines recommend. To do anything less will inflame the current opioid abuse and should constitute malpractice. Indeed, this medical stigma is a huge barrier to progress in this opioid crisis.

Your Town Hall meeting is not the first time chiropractic has been ignored at CNN. For instance on November 18, 2012, Dr. Gupta aired another documentary on opioid abuse in his CNN special, Deadly Dose, discovering once again the majority of patients seeking opioids suffered with back pain.

Ostensibly viewers were led to believe that Dr. Gupta was searching for a nondrug solution to back pain, but he never mentioned chiropractors. Certainly millions of viewers were asking themselves, “But what about chiropractors?” knowing full well chiropractic is an effective nondrug treatment for chronic back pain.

The same sentiment probably was in the minds of viewers watching your Town Hall meeting. Indeed, it appears chiropractors are the proverbial “elephant in the CNN newsroom.”

Seat at the Table

At the conclusion of your Town Hall meeting you mentioned that you were merely “scratching the surface” and there would be similar programs in the future.

In light of the failure of the medical model for chronic pain and the latest research supporting nondrug treatments, doesn’t it seem logical that the chiropractic profession should have had a seat at your Town Hall table?

Indeed, that would be even more controversial than Dr. Gupta recommending medical marijuana!

Let me recommend a few notable researchers in my field, such as the world renowned spine expert, Scott Haldeman, MD, DC, PhD, and founder of World Spine Care. Another notable researcher is Christine Goertz, DC, PhD, chief executive officer of The Spine Institute for Quality™.

If it is not too bold, I would also like an invitation as director of a website representing Chiropractors for Fair Journalism.

My premise is simple: chiropractors constitute the third-largest physician-level healthcare profession in the nation in the midst of a pandemic of back pain and opioid abuse, but chiropractic care has never been featured in an in-depth, fair and balanced news report at CNN due to a stigma among medical reporters.

This revelation could also be the topic of another Town Hall meeting – how the boycott of chiropractors has contributed to this opioid crisis.

I hope you will keep in mind these points on this opioid crisis and consider chiropractic as an important factor to help solve the opioid epidemic for chronic pain in your next Town Hall program. The public has the right to know there is a nondrug alternative to opioids painkillers.

[6] Chou et al., Diagnosis and treatment of low back pain: a joint clinical practice guideline from the American College of Physicians and the American Pain Society. Annals of Internal Med., 2007, vol. 147 no.7

[9] PB Bishop et al., “The C.H.I.R.O. (Chiropractic Hospital-Based Interventions Research Outcomes) part I: A Randomized Controlled Trial On The Effectiveness Of Clinical Practice Guidelines In The Medical And Chiropractic Management Of Patients With Acute Mechanical Low Back Pain,” presented at the annual meeting of the International Society for the Study of the Lumbar Spine Hong Kong, 2007; presented at the annual meeting of the North American Spine Society, Austin, Texas, 2007; Spine, in press.

[22] Testimony before The Institute of Medicine: Committee on Use of CAM by the American Public on Feb. 27, 2003.