Since the election of Donald Trump, the nightly news resembles a television soap opera rather than a synopsis of daily events. Fake news, alternative facts, healthcare reform debates, and White House in-fighting have replaced the mundane topics we generally hear.

While many people tell me they have stopped watching the evening news, I’ve never watched as much as I now do since there are new twists and turns daily. Indeed, the nightly news should be renamed, “As the White House Turns,” reminiscent of the daily soap opera, “As the World Turns.”

The same can be said for the chiropractic profession.

We’ve seen in our chiropractic news journals similar topical issues, such as the quest to include prescription rights into chiropractic. We’ve also seen the infusion of questionable nontraditional adjusting methods that are promoted with much fanfare as “modern, scientific, and gentle,” but short on proof as Mike Schneider, DC, PhD, found in his comparative study.

Indeed, with over 140 treatments now in use, this is equivalent to arguing over religion that only leads to more in-fighting in our rank and file.

What’s in a Name?

Without question the most inexplicable new topic thrust into our profession was the August 2017 edition of Dynamic Chiropractic, the leading chiropractic journal, with its cover article, “A Name Change Will Save Our

I suggest the image ‘chiropractor’ brings to mind at the subconscious level (the target of successful marketing) is not that of a legitimate doctor of health care provider, but that of a tradesman or manual laborer, possibly even something  mechanical, destructive or evil. It rhymes with wrack, crack, and quack.

After I stopped gasping at his suggestion and explanation, my first thought was wondering how his article became the cover story of this fine journal.

With a little research, his suggestion became more curious when I discovered Dr. Reuben’s specializes in Veterinary Orthopedic Manipulation (VOM), a non-invasive approach to spinal-related issues with horses.

As a horse racing fan myself growing up near Santa Anita Park in SoCal, I am aware of the value of chiropractic care for race horses, including Kentucky Derby winners such as California Chrome, I’ll Have Another, Nyquist, and Funny Cide. Even a horse named “Chiropractor” won the 2015 Hollywood Derby at Del Mar.

His shocking suggestion and prominence as the cover story in Dynamic Chiropractic made me think of an old Southern saying “Bless your heart,” a phrase that is common in the South and has multiple meanings.

More often it is used as a precursor to an insult to soften the blow, such as “Bless your heart, you’re dumb as dirt, but you can’t help it” by individuals who wish to “be sweet” and do not wish to “act ugly.” It is also used as a way of saying “f*ck you” by some Southerners of the redneck clan.

Although Dr. Reuben is well-intentioned discussing the image of our profession, bless his heart, he is completely off-base, avoiding the real issues at hand—the medical war against chiropractic to defame, contain, and boycott our brand of spine care.

The real problem isn’t the Greek origin of our profession’s name as he points out or the fact chiropractic “rhymes with wrack, crack, and quack,” the real problem is the on-going chirophobia that permeates our society.

Dr. Reuben also seems oblivious to the media bias against chiropractors and its complicity to defame chiropractors that went viral as we witnessed with the attack on a pediatric chiropractor Down Under and the recent Katie May accidental death.

Rather than a name change to an even more confusing word “vertebratrist” as Dr. Reuben suggests, I suggest we address the reason why “chiropractic” is tainted by medical propaganda. Bless his heart, but Dr. Reuben apparently is oblivious to this medical war.

There is an established history of this sordid campaign to destroy our profession that was exposed at the Wilk v. AMA antitrust trial. Judge Susan Getzendanner mentioned in her decision:

“The activities of the AMA undoubtedly have injured the reputation of chiropractors generally…In my judgment, this injury continues to the present time and likely continues to adversely affect the plaintiffs.  The AMA has never made any attempt to publicly repair the damage the boycott did to chiropractors’ reputations.”[1]

Certainly this injury to our reputation continues to this day, but the solution isn’t to “put lipstick on a pig” by renaming our profession as Dr. Reuben suggests.

Instead of hiding from our fascinating history, we should embrace it to show the world how we’ve been the object of medical ridicule and hate crimes. Our challenge is to address this defamation campaign with the facts about the history of these events, the culprits such as the Medical Mussolini, the Committee on Quackery, and media columnists such as Ann Landers that led to our tainted image.

Hate crimes are not only against religious and social minorities, but also includes medical minorities such as chiropractic, homeopathy, naturopathy, acupuncture, TCM, and even nurse practitioners, to name a few. To this day medical trolls at Science-Based Medicine and its Australian equivalent, Friends of Science in Medicine, continue to harangue these healthcare minorities. 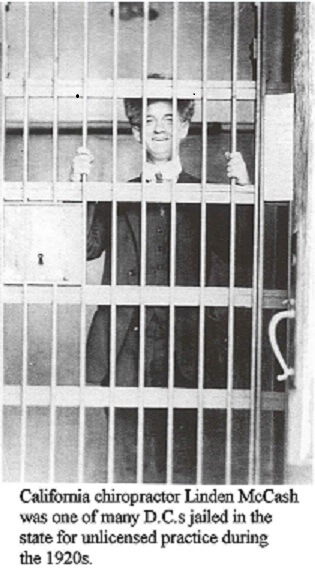 Perhaps the most obvious hate crime long forgotten in American history occurred in the first half of the twentieth century when over 12,000 chiropractors were prosecuted 15,000 times and 3,300 were sent to prison for allegedly practicing medicine without a license, which was a ruse since DCs were helping sick people get well using only their hands.[2]

Never has the media mentioned this backstory to our history; equivalent to not mentioning of slavery as the backstory to the status of African-Americans today. People simply do not understand our backstory or why they think the way they do about our profession.

Of course, we never have seen such an article as long as MDs are medical reporters and Big Pharma pays their salaries. And we won’t until we create disruptive journalism to force this issue such as #Chiropractors Matter.

But the tide is turning on these medical curmudgeons.

Never before have we had the evidence to support our profession, such as the 1994 AHCPR guideline #14 on Acute Low Back Pain in Adults to the current 2017 ACP and JAMA guidelines on LBP, Even the almighty Joint Commission  promoted chiropractors from the ranks of the medical zombies (recall the Joint led the boycott of DCs leading to the Wilk v. AMA trial) with its Revisions to pain management effective January 1, 2015.

Without question, our profession has been shown to be best equipped to treat the opioid and back pain epidemics with our brand of nondrug and nonsurgical care. Rather than hiding from our name, we should embrace the long battle that has been won in the court of scientific inquiry.

Now our goal is to win in the court of public opinion with disruptive journalism and marketing. We’ve used litigation in the courts and legislation on Capitol Hill to some degree of success, but we cannot win unless we can:

n     Reveal the medical bigotry, and

n     Push back on the outright hate crimes by journalists

While I admire the efforts of Dr. Reuben to help impaired horses, his article will not contribute to our fight against medical oppression. In fact, I would not be surprised if the medical trolls actually use his article to smear our profession with a possible headline, “Horse Chiropractor Bucks Chiropractic.”